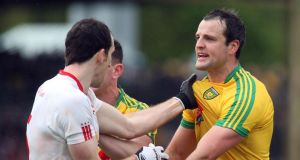 There were passages during this endlessly fascinating war of minds and bodies when it seemed possible Mickey Harte was about to concoct another of those brilliant hours of defiance.

To come into Ballybofey and thieve a win against the most consistent team in Ulster would have been all but a fairy-tale. It was clear, late in the game, seconds after Michael Murphy sent one of his unique long-range scores sailing along the breeze that it probably wouldn’t happen. But this was a vindication for one of the best strategists Gaelic football has seen.

“We didn’t mind that,” Harte said when the dismissals of Tyrone’s chances was brought up. “ That’s what people in the media will do. They look at some results and make assessments and tend to overlook other results. We didn’t feel like that at all. We didn’t feel in any way we couldn’t come in and win this game.

“We were well prepared game and I think our players played to show they were well prepared and they are hugely disappointed they didn’t get anything more out of it because they put in a really big shift there and played some wonderful football.

“But Donegal are a fine side too. It’s not as if we are being beaten by some kind of minnow . . . You have to give credit to Donegal, they battened down the hatches and they got more of a battle than they anticipated today.”

“That is what we expected it to be,” Gallagher said later. “There was going to be very little between the teams and that is the way it turned out. They got the goal and that gave them a massive start in rebuilding the four point lead, it gave them momentum. And I thought Tyrone played very well after that.”

Among the Donegal surprises was the deployment of Colm McFadden in a deeper role and the contribution of 1-2 from Martin McElhinney. Christy Toye chipped in with 0-2 to complete a fine afternoon for the St Michael’s men.

“Ah look . . . they are three great players and three big men as well and great to see all three going well,” Gallagher acknowledged. “Martin has established himself this year and we are delighted with him. And I was over the moon with Colm and Christy, they defy years and the amount of time they put into it and their enthusiasm at training paid off.”

McElhinney has always been a quietly big performer for Donegal and flourished here, stepping up too nail a vital 36th-minute goal to revive the spirits of the anxious home support. He shrugged when asked about the significance of the score. “I think there was a couple of clutch moments. It ebbed and flowed but they got two points just before half-time and in fairness it was a good time to get a goal. But look, it was just a dogfight from the word go and we are delighted to get out the right side.”

Day duly won, Michael Murphy resumed his captain’s role and declined all invitations to negatively critique the hour he spent in the company of Justin McMahon. “Ah, c’mere, as an individual and a player for Donegal all you want to do is to put yourself against the best teams in the country and you are going to get that against Tyrone. They have some of the most fantastic individuals that you will see playing Gaelic football today. Whether it is myself or Papa in goal, you are pitting your wits against somebody and that is all you can ask. It is tough out there.”

“We have no choice. We are out now in four weeks’ time. Coming in we felt well prepared and we also felt it would be a nightmare situation to be out of the Ulster championship before it even started. So we are delighted.”

And for the fourth time in five summers, Donegal have consigned Tyrone to the scenic route towards Croke Park and August. Mickey Harte seemed like a man undaunted by the prospect. “We are no strangers to that particular avenue of returning to the championship and being effective. I think what I saw today gives me great confidence that we’ll not be a bad place when the dust settles.”