Michael Darragh Macauley revelling in his central role for Dublin 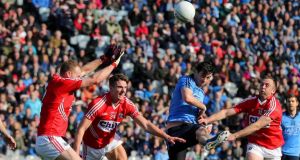 Michael Darragh Macauley in action against Cork: “If you don’t have the belly for the fight, and the talent as well, it is not going to be good enough.” Photo: Cathal Noonan/Inpho


Imagine if Michael Darragh Macauley slipped through the cracks of Dublin’s soaring dynasty. “I still give Pat Gilroy abuse because he didn’t have me in in his first year,” he said at the Opel kit for clubs launch.

“I went to a trial in 2009 and had the best game of my life. I was marking Ciarán Whelan and scored four points from play in a 40-minute match.

“Everyone came up to me afterwards and said, ‘Jeez, you’ve walked onto the panel’. I was delighted with myself. Was trying to keep my hopes down.

“A panel of 55 players went up on the internet and I didn’t make the cut. I was heartbroken after that. I would have been 20. Eight midfielders and I didn’t get a sniff,” added the current footballer of the year, five very busy years later.

Macauley couldn’t be ignored after his marauding displays propelled Ballyboden St Enda’s to the Dublin championship in 2009. “I tell Pat we would’ve won an All-Ireland in 2010 if he had me in a year earlier!”

Seriously though, a safe assumption at the moment is the belief coursing through the Dublin’s ranks is only comparable to great sporting champions. Think LeBron James’s Miami Heat, the Kilkenny hurlers until last summer, Kerry when littered with Ó Sés, Manchester United until David Moyes’ unsteady hand and so on.

If the 17-point swing of the league semi-final against Cork showed anything it is that this Dublin team will never again be startled into submission.

“This Dublin team has built up a level of mental resolve which has been kind of fabricated for years,” said Macauley.

“It started since I’ve been involved with the team in 2010. It can only be established through experience and that experience has been moulded in All-Ireland finals and semi-finals and quarter-finals, going up to Tyrone, going down to Cork.

“Matches when you are told you can’t win them. When you are down by 10 points. When you come back and win that match, that kind of mental resolve really sticks with you.

Special weekend
“It’s not something that can be built over night. There is no talk that anyone can give, no special weekend away to build it. It’s a mental pool we can draw from when needed. We showed that in the second half against Cork.”

Not that Jim Gavin would approve of such talk. Or any public utterances at all.

“Some other name will be on Sam Maguire if we keep up that level of football,” Macauley said of the way Cork initially tore through them.

“It was definitely an interesting game. If we hadn’t got over the line in the end it would have been a flip situation. Jim is smart enough to look more at the first half than the second half. Look at the where the weaknesses are.”

The weaknesses are through the middle, according to one expert speaking in tomorrow’s Irish Times , and Jim McGuinness, Éamonn Fitzmaurice, James Horan, Mickey Harte will have seen it too.

In other intercounty labs such flaws are being examined in microscopic detail. Pulling certain threads in the hope that Dublin might unravel. Does Gavin empower his players to solve problems themselves?

Magic wand
“That is certainly a philosophy of Jim’s, to take things upon our own shoulders. The manager can only bring the donkeys to water. There is no magic wand. It’s important for us to stand up for ourselves. We did that at half-time against Cork.

“Jim wouldn’t be of the Alex Ferguson, dictator-style of management. There’s a culture within our team. You have to be able to step into another’s shoes. If you don’t have the belly for the fight, and the talent as well, it is not going to be good enough.”

The belly for the fight – see the Miami Heat, always Kilkenny, Kerry when littered with the Ó Sés, Manchester United until the time of Fellaini.

Macauley, the man, is so important to Dublin. See how he drove into Cork, all bobbing and weaving when the comeback demanded dominance.

“It’s like journalists look up the word ‘unorthodox’ in a thesaurus before they start talking about me . . . . It’s probably the basketball influence that makes me run or bounce or solo the ball a bit different.”

“You can ask my neighbours, I grew up with a basketball stuck to my hands. Shooting hoops until four o’clock in the morning. Literally needed to get a spotlight installed in the back garden. I was shooting hoops yesterday. It really felt like summer . . . .”

The NBA play-offs are on now. “Yeah, I’ll be watching to see how the Heat get on, Oklahoma and Kevin Durant as well. These freak shows”

The LeBron James-Durant rivalry is fast becoming the modern version of ‘Magic’ Johnston versus Larry Bird.

“I know what Durant is doing at the moment but I think Russell Westbrook, athletically, is the best player in the NBA,” he said of the OKC Thunder point guard. “I’d love to be in the gym with him to see what he does, what he lifts because he flies through the air.”