Meath show their composure to leave Wicklow frustrated in Aughrim 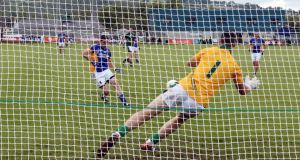 Wicklow were left to rue a wasted opportunity of making a rare appearance in the Leinster semi-final on Saturday night.

In front of a packed house at raucous O’Byrne Park in Aughrim, Harry Murphy’s side just lacked the killer punch to put Meath away.

By contrast, the Royals were a little more composed when the opportunities presented themselves, as evidenced by the seven points from play contributed by the outstanding Graham Reilly and eye-catching debutant, Eamonn Wallace.

Murphy was distraught trying to make sense of what he termed “30 seconds of madness” that played such a huge role in deciding the contest. .

Captain Paul Earls’ seventh-minute goal had helped Wicklow establish a very strong position into a gale, and they were just two points in arrears when awarded a 32nd minute penalty for a foul on the magnificent John McGrath.

Big bounce
It seemed a harsh enough call on goalkeeper Paddy O’Rourke but he proceeded to dive to his right to save Seanie Furlong’s weak effort. Before you knew it, Kevin Reilly had launched a wind-assisted drive from 70 metres that eluded Mickey Newman and Damian Power, took a big bounce on the 20-metre line and flew over the head of stranded Wicklow netminder, John Flynn to the net.

Instead of being a point ahead, the hosts were five behind and they went in at the break trailing by 1-10 to 1-4. Despite scoring four points in the opening four minutes of the second half, it was a deficit they could never reel in.

“To miss a penalty and then have them come down the field and score that freak,” mused Murphy. “Johnny was playing well all day, he made some great saves, and then for something like that to happen. I just feel sorry for the chap.

“We had played very well against the wind in the first half. We were driving at them all the time which is what we wanted to do. But then they got that goal. To be honest, it’s going to be hard to lift them now. They know and I know there wasn’t a five-point gap in that game. Meath were there for the taking but it wasn’t to be. If you don’t take your chances at one end of the field and things like that happen at the other end then you’re not going to win many games.”

Meath boss Mick O’Dowd agreed that the spell just before half time was vital but maintained his players would have responded positively, even if Furlong had beaten O’Rourke.

“It came at an important stage but you would put trust in our lads that if the penalty had gone in they would have responded in a different way to that at that time,” he said.

Certainly, their riposte to Wicklow’s four-point salvo straight from the restart was notable, with two quick points from Pauric Harnan and Reilly.

Wicklow did reduce the margin to three and O’Rourke made a brilliant save from McLoughlin on the hour.

Wallace added his third point from the very next attack and an outstanding point from Joe Sheridan within seconds of his introduction, plus a fisted effort by another sub, Paddy Gilsenan ensured Meath’s progress to the final four.

Jamie Vardy reaches his century to get Leicester back on track 17:38
Glorious Greenwood as Man United thrash Bournemouth 17:28
Serpentine stays on from the front to steal Epsom Derby for Aidan O’Brien 17:24
Love tears them apart in stunning Epsom Oaks romp 16:33
Valterri Bottas pips Lewis Hamilton to pole in Austria 15:43
Crossword Get access to over 6,000 interactive crosswords