Meath dominant against Longford in Navan 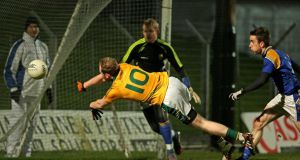 Last year’s beaten finalists Meath are on the cusp of a semi-final spot in the O’Byrne after seeing off the feeble challenge of Longford at Pairc Táilteann.

The visitors, boosted by a goal from Francis Magee on 18 minutes, promised much early on and led by five points at one stage.

A Seán Tobín goal following a centre from the impressive Ruairí O’Dowd brought Meath back into it and by half–time they had drawn level at 1-5 apiece.

O’Dowd, from the Walterstown club, fisted the equalising point in first half injury time and added two more to his tally at the start of the second half.

It was all Meath throughout the third quarter, with the returning Jamie Queeney, who switched from midfield to full forward to good effect, scoring three points.

Kilmacud Crokes clubman McCormack accounted for three of their second-half points, the other came from Aidan Rowan.

Meath, though, looked impressive throughout that second period, with Joey Wallace and Andrew Tormey also showing up well, though the latter was sent off after he was shown a second yellow card on the stroke of full-time.

An injury time goal from Pádraig Fogarty rescued an understrength and underwhelming Kildare in Athy.

The win ensured that the champions retained a 100 per cent record going into the weekend’s third round tie with UCD.

Carlow looked like they were heading for a deserved victory after sub Eric Bambrick goaled in the 57th minute to bring the sides level. Ed Finnegan followed up with his second point and when the excellent Daniel St Ledger landed a monstrous free, Turlough O’Brien’s men were bound for a fantastic win.

It wasn’t to be, though, as impressive sub Gavin Farrell exchanged passes with Fionn Dowling in the second minute of injury time and found Séamus Hanafin. Hanafin fed Fogarty and the St Laurence’s man danced around his marker before rifling an unstoppable shot beyond Andy O’Brien.

It was Fogarty’s second goal, with the first coming after five minutes. The initial strike followed a brace of frees from Darroch Mulhall and a good score from play by Fogarty.

That made it 1-3 to 0-0, with people still coming into the ground, but the hosts only managed another two points in the first half and had only added two more in the latter period before Fogarty’s dramatic late strike.

The standard of play left a lot to be desired but to be fair underfoot conditions at Geraldine Park were horrible after a day of incessant rain.

Darragh Foley was heroic at midfield as Carlow dragged themselves back into the game and, with Paul Broderick kicking three points, they trailed by just 1-5 to 0-4 at half-time.

Mulhall scored a brilliant 53rd minute point to retain that gap but Shane Connolly had been forced into a reflex save and Carlow wasted two other goal chances before Bambrick made no mistake.

That set up a thrilling finale and it was Kildare who found that little bit of class right at the death to decide the tie.

DIT are in pole position to make the O’Byrne Cup semi-final after claiming their second major scalp with a four-points win over Wicklow in Bray.

Wicklow had the advantage of a very strong wind in the first half but only led by three points - 0-11 to 2-2 - at the break.

Wicklow gave away two penalties in the first 20 minutes, both drilled to the net by DIT corner forward Conor Madden and it took a succession of points by John McGrath and Ross O’Brien to give the homeside the half-time advantage.

Wicklow were awarded a penalty in the final quarter for a foul on Dean Odlum but McGrath blasted the spot kick over the bar before Conor Grimes took advantage of a mistake by goalkeeper Brendan Doyle to bundle the clinching goal over the line in the closing minutes.

Hosts Laois suffered a heavy defeat to neighbours Offaly in the first round, while the students debuted with defeat to Dublin at Parnell Park but it was they who kept their hopes alive in Portarlington ahead of the closing round on Sunday.

On wet and windy evening, Ross Munnelly opened the scoring but the students responded with 10 unanswered points before Munnelly added his second and third for Laois in the closing minutes.

Laois were completely outplayed at this stage and were dealt a bad blow when Darren Strong was sent off for a second yellow card after 20 minutes.

With Niall Walsh and David Duke taking scores at their ease the visitors went in at the break leading 0-11 to 0-4.

Laois staged a mild recovery with Colm Kelly, a sub after 50 minutes, adding a brace of points, then Donie Kingston set up Munnelly for the games only goal with a minute remaining.

Laois now welcome Dublin to the same venue and Seán Cotter’s side head for a showdown with Offaly in Tullamore, with a knockout place on offer for the winners.

After a 20-month wait stretching back to a Leinster championship defeat of Carlow in May 2013, Westmeath’s senior footballers eventually recorded a competitive victory with a narrow but deserved win over DCU in Kinnegad.

Westmeath got off to a dream stsart when wing back James Dolan scored a goal after just 17 seconds.

Conor McHugh was outstanding in attack for the students, but hard-working captain Ger Egan showed the way at the other end with a cleverly lobbed goal for the home team in the 24th minute.

In the last minute of normal time in the first half, Conor McNally slapped the ball to the net and Westmeath led by 2-5 to 1-6 at the interval.

A brace of points by McHugh levelled the contest within six minutes of the restart. Westmeath’s response was impressive, Lorcan Smyth guiding the ball to the net after James Dolan’s initial shot was saved by Tadhg Lowe.

Some outstanding free-taking by Ray Connellan enabled the hosts to nudge ahead and they had to withstand a late onslaught from the visitors, putting 10 men on the line in the dying seconds and forcing McHugh to take a point from a close-range free.

DCU finished with 14 men. Tom Flynn was black-carded in the 69th minute and could not be replaced, as the allocated six subs had been used up.

Wexford recorded their first victory under new manager David Power when they saw off a stiff Carlow IT challenge at St. Patrick’s Park, Enniscorthy.

Playing with a strong first half wind, Wexford dominated the opening quarter at the end of which they led 1-4 to 0-0, their goal a 13th minute effort from impressive corner-forward Dermot Flood.

Carlow IT had to weight until the 22nd minute for their opening score, a Barry McHugh free, and with Tom Nolan and Liam Boland kicking points they managed to reduce the deficit. But it was Wexford who still led 1-5 to 0-4 at the interval.

Carlow IT opened the second half impressively with two Tom Sheils points to reduce the deficit to two points but Wexford managed to regain the initiative playing into the strong breeze with Kevin O’Grady and Dermot Flood responding with points.

They took control of the closing 15 minutes by playing some quality attacking football leading to fine points from Kevin O’Grady, Kevin Rowe and sub Declan Murphy to build a 1-12 to 0-7 lead. While Carlow IT managed some late points from Sheils and Liam Boland, Wexford were out of reacht by then.

Ed O’Byrne stunned Louth with an injury-time goal to earn UCD a winner-takes-all showdown with Kildare next Sunday.

Louth seemed to have done enough to secure Colin Kelly his first win when Ryan Burns edged them ahead with a close-range free on the stroke of full-time, but UCD conjured one last attack and influential half-time sub Ryan Basquel teed up O’Byrne for a simple finish.

The first period was tight, but Louth were left to rue some poor finishing, a failing that saw them kick 17 wides.

The lead changed hands a couple of times in the lead-in to half-time, but Anthony Williams ensured the sides adjourned level at 0-5 apiece.

Moolick’s goal put Louth on the back foot after the restart and they didn’t draw level again until the 63rd minute through Hugh McGinn.

Ruairí Moore then put them ahead before Anthony Jordan levelled matters once again.

Teenager Burns looked to have won it for the home side, but Basquel’s flash of brilliance and O’Byrne’s opportunism clinched the points for UCD.