Mayo repeat history by taking Kerry to the brink in cliffhanger 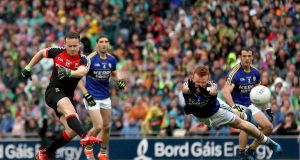 There was a lot of history repeating itself in Croke Park on Sunday. For the fourth year running, Mayo have ended up in a tight replay embrace with opponents they should perhaps have beaten at the first time of asking – and for the fourth time in five GAA All-Ireland semi-finals, Eamonn Fitzmaurice left Dublin pondering the lessons of failing to win.

It was a terrific contest in wet and slippery conditions. Mayo confirmed that they had rediscovered their best form with a punchy display that put Kerry under real pressure. Yet they will regret the familiar lapses of conceding goals when their opponents looked to be running out of answers.

Mayo will at the same time be pleased that it wasn’t worse. Just after Paddy Durcan had equalised in the fourth minute of injury-time, Bryan Sheehan lined up a free in the dying seconds. It was a long way out, around 55 metres, but he’s a distance-kicker; unfortunately he was also just on the pitch around a minute and never properly got hold of the kick.

It dropped down to Aidan O’Shea and the match ended, with a replay in six days, next Saturday at 3pm.

Talk of the place

O’Shea was by then the talk of the place. Strangely, having taken flack for allowing Lee Keegan follow Enda Smith back to the edge of his own square in the drawn quarter-final with Roscommon, Mayo management went one better by committing another in-form outfield player to spend the whole match there.

Keegan had spent the second half at full back, having scored 1-3 when following Smith on his first-half travels. In this case, O’Shea spent the whole match as the putative solution to the Kieran Donaghy problem and his physical menace was lost to the front eight.

As it turned out there was more to marking the Stacks full forward than contesting the dropping ball, of which there wasn’t much. O’Shea appeared further instructed not to follow his prey and the result was Donaghy bobbed all around the place and was involved in about half of Kerry’s scores.

If the Munster champions’ manager benefited from his counterpart’s tactical gamble, his own match-up of Paul Murphy on Keegan worked out very satisfactorily. Less man-marker than roll of shrink wrap, Murphy curtailed Mayo’s hitherto most influential player, attracting in the process the occasional attention of referee Maurice Deegan and with that, a 27th-minute yellow card.

One match-up that didn’t work so well was Shane Enright’s detail on Andy Moran. The veteran Ballaghaderreen forward had one of his best performances and shot 1-5, all from play, and only one wide. He clearly likes playing Kerry and even outdid his 1-3 from the two semi-finals in 2014 and still has next week to come.

He flagged towards the end but had run riot from the moment in the fifth minute when the Kerry full backs coughed up the ball and he expertly rifled in the first score of the match.

The hard-working Jason Doherty, who also played a big role for Mayo, kicked a point seconds later and Kerry trailed by four. He also set up Moran for a second point and a 1-2 to 0-2 lead in the 13th minute.

It took virtually no time for that to change. Donaghy, who coming in from the outfield looked every inch his basketballer alter ego, weaved around with his head up, measured the pass into Stephen O’Brien, who finished it to the net.

Maybe liberated from the requirement to stand on the square, knowing that dropping ball might be more of hazard than a help with O’Shea around, he drifted and directed operations, calm in possession and acutely observant.

Mayo though had all the early energy. Keith Higgins darted around the defence like an electric eel, covering, tackling and breaking forward, while Kerry also struggled to stem the tide at centrefield. Jack Barry replaced Anthony Maher at half-time, bringing a bit more mobility to the area and forcing a good save from David Clarke in the 53rd minute.

The Mayo goalkeeper once again demonstrated his acumen at shot-stopping, unlucky for the second goal in that his fine block of Moran’s thunderous kick rebounded nicely for Johnny Buckley in the 46th minute.

Kerry went out without a sweeper despite all of the warnings about their vulnerability to direct running. At times they looked in disarray. Moran’s third point, which rebuilt a lead of four, 2-5 to 1-14, came after goalkeeper Brian Kelly, twice, Mark Griffin and Enright all had to block shots at goal in the same sequence.

Minutes previously Colm Boyle had waltzed through, selling a dummy to Murphy before banging in a second goal to restore Mayo’s lead.

Despite obviously holding the initiative, Mayo still went in level, having conceded frees, three of which Paul Geaney converted, as well as a fine effort by Donaghy. Somehow Kerry were still right there on their shoulder.

Immediately on the resumption Donaghy created a chance for Geaney to put them ahead but Mayo’s response was forceful. Cillian O’Connor directed a free to his brother Diarmuid, who supplied Moran for his fourth.

From there it was punch for punch. Three times Kerry led; three times they were hauled back. Cillian O’Connor muscled in from the left to give Mayo the lead but Kerry replacement Barry John Keane coolly equalised.

Mayo got sloppy with their shot selection and finishing. Chris Barrett had a go and missed. Ditto Durcan.

With the tension heated enough to evaporate the damp, Geaney made a chance for Murphy to kick Kerry ahead in the 69th minute. Geaney nearly added a second but for phenomenal defence by Higgins in injury-time. The chance came though and it was Durcan who made it count in the 74th minute.

They’ll be back at the same place next Saturday and it’s hard to imagine anyone in the crowd of 66,195 won’t want to be with them.