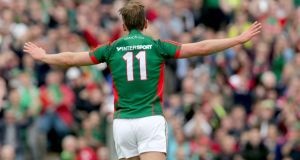 Aidan O’Shea scored a hattrick as Mayo thrashed Sligo to in their fifth Connacht title in a row. Photograph: Inpho

There comes a point on a day like this when numbers start to lose their meaning. Still, for what it’s worth and to satisfy the record-keepers, here are the bones of it.

Mayo beat Sligo by 26 points to rack up their fifth Connacht title in a row. By putting 6-25 on Niall Carew’s side, they outstripped the previous record score for a Connacht final by a gob-smacking 2-10. They’re 14 games unbeaten in Connacht now, with their last defeat coming against Sligo away back on June 5th 2010.

Aidan O’Shea played at full-forward here and ended the day with 3-4 against his name. By our reckoning, he had a hand in a further 2-5. A fine-comb of the video might find cause to quibble ever-so slightly with that second figure but that only reiterates what we said about numbers coming to mean nothing. You wouldn’t expect Bill Gates to make a fuss over the decimal points.

Dominate It’s hard to remember a provincial final where one player so dominated – or was allowed to so dominate. Mayo directed virtually all traffic through O’Shea and Sligo could conceive of no way to stop him.

They didn’t try to double-team him, they had a go with a few different markers to no discernible effect. They seemed to just hope he’d take mercy on them. He didn’t.

“The chances fell to me and I’m delighted I took them,” O’Shea aw-sucksed afterwards. “I have been on record as saying I don’t use my physicality as much as people think. My skills are something I have practiced all my life and all my career. I think I utilised them as well as my physical presence so there was a bit of everything there.

“At the start of the year it was mentioned that they might rotate me around the pitch a bit more to keep teams guessing I suppose. The last day it worked out in Galway and the early goals here meant there was space in the defence. They were probably chasing the game a wee bit and it left a lot of space inside. Will I be full forward the next day? I’m not sure – it will depend on who we are playing.” 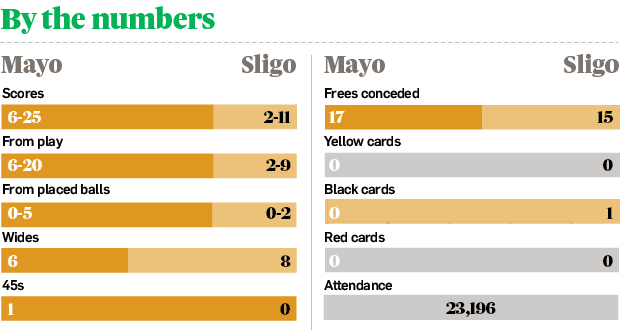 Whoever it is will consider themselves given fair-warning. This was an almost vulgar display of power from O’Shea on the edge of the Sligo square. There were times when he looked like the only player in an under-14 match whose voice had broken.

Through him, Mayo made sure they got their business done early. They led 3-6 to 0-2 after 21 minutes and, unbelievably, O’Shea was either responsible for or the key distribution point of every one of their scores to that point.

He set Cillian O’Connor up for the opening point, put Jason Doherty away to feed O’Connor for the first goal, then played his brother Seamie in for the second.

Then O’Shea scored a point of his own, drew a smart save from Adrian Devanney in the Sligo goal, sent Jason Doherty through for his first point of the day before scoring the first of his goals. All within the opening 20 minutes.

There wasn’t much else to say after that. For all that it will go down as the Aidan O’Shea final, Mayo had plenty more to carry forward with them. They reduced the kick-out strategy that had served Sligo so well against Roscommon to ashes, with Tom Parsons and first Seamie O’Shea and later Barry Moran thoroughly dominant around the middle.

The old-firm half-back line of Keegan, Boyle and Vaughan were the engine of the side as so often before and Tom Cunniffe looks to have brought the sort of flinty, brooding edge to full back that they’ve needed for a while.

Relentless show That said, Sligo got in for two goals, which will at least give Pat Homes and Noel Connelly a measure of video work for them to do ahead of the quarter-final.

They will have a job on their hands finding some manner of nit to pick because their players put on a relentless show of force.

“They did,” agreed Connelly, “you’d have to be pleased with that. And that’s the challenge every day you go out, when you hit a purple patch and your tackling and intensity is high, is to try to keep it for 70 minutes.

“We’re pleased with the performance, everybody worked hard and that’s what we asked of them going out – and they delivered, in fairness. But today’s over, we’ve to move on in three weeks’ time.”