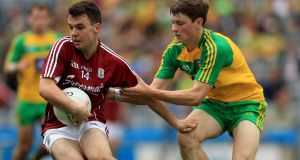 Galway’s lethal inside duo of Robert Finnerty and Desmond Conneely combined to send the young Tribesmen through to a first All-Ireland minor football final in nine years.

Finnerty bagged 1-5 and Conneely added 1-2 as Galway set up a final clash with holders Kerry or Kildare on September 18th.

Finnerty is the son of former Mayo star Anthony and he showed real forward class as Ulster champions Donegal were sent packing.

Donegal ensured a nervy finish when Enda McCormick cracked home a smashing goal in the 57th minute to halve a six-point deficit.

The winners had goalkeeper Cormac Haslam to thank for a couple of fine saves, however.

Early in the second half, Haslam was out smartly to keep out Donegal’s Niall O’Donnell before he pulled off a stunning double-save in stoppage time, the latter a tip-over from sub Gary Molloy’s effort.

But when the dust settled, Galway were through to the showpiece decider, a marked improvement on last year when they fell at the quarter-final stage to Tipperary.

In Finnerty they had a match-winner but Conneely was excellent too.

As Galway battled against Donegal’s swarm defence, Finnerty and Conneely worked hard inside to latch onto long and diagonal balls.

His goal in the fifth minute was the result of good work from side-kick Conneely, who failed to gather possession initially but worked hard to hassle Mark Curran into an error.

The ball broke for Finnerty, who finished expertly at the Hill 16 end.

With Finnerty also on song from placed balls, Galway went on to lead by five points, 1-5 to 0-3, with less than 18 minutes on the watch.

But Donegal, operating with just one man inside the 45m line at times, were still doing enough to stay in touch through joint captains Jason McGee and Niall O’Donnell, and Eoghan McGettigan at full forward.

Fionnán Garvey opened the second half scoring for Galway with a monstrous point before goal chances came and went at both ends, Finian Ó Laoi dragging a shot wide before Haslam kept out O’Donnell.

Donegal suffered a blow with 20 minutes remaining when Seaghen Ferry was black-carded and Galway, who used just one sub in the entire game, moved six points clear with nine minutes left.

Aaron McCrea’s slip on the Hogan Stand side of the field allowed Finnerty to slip behind him and picking up possession with an impudent chip-lift, he transferred to wing forward Ó Laoi.

Crucially, Ó Laoi took the right option and picked out an unmarked Conneely, who finished expertly.