Laois should have enough to progress against Carlow 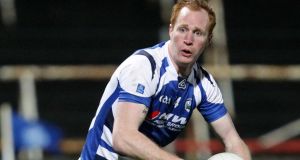 Laois’s Padraig Clancy will attempt to fill a huge void in midfield in the absence of Brendan Quigley. Photograph: Cathal Noonan/Inpho

The luck of the draw means either Carlow or Laois will stay afloat for a while yet. On the evidence of both counties opening round collapses at the hands of Louth and Westmeath – both victors immediately followed them through the trap door – neither looked primed for summer football.

And yet, this historic risk by the Leinster Council to trial a championship game on a Friday night, without any compensation for loss of earnings by players taking the day off work, means one of these midland rivals will be still standing after this convoluted football weekend. The losers can head off to sunnier climes, just like three important Laois men – Brendan Quigley, Kevin Meaney and Gary Walsh – have already done.

America flashed its eyes at them and away the Wild Geese flew. Quigley leaves a huge void in midfield that Padraig Clancy will attempt to fill. Walsh was taking the frees.

Justin McNulty has reacted by shifting Donie Kingston in to full forward where they should break a fair amount of ball off the big man. Even if the above trio hadn’t hit the road, the Armagh native was going to be forced into changes after the abysmal showing against Louth on May 26th. The depth of individual talent in the county is seen by Paul Begley, Kieran Lillis, Conor Meredith, David Conway and Billy Sheehan also coming into the side.

Seeing that Padraig McMahon will raid from wing back, John O’Loughlin is in alongside Clancy in midfield and Ross Munnelly feeding off Kingston, Laois should have enough about them to progress.

So long as they transfer what McNulty has been preaching on training ground to the field of play. Because they failed to do that the last day.

Rainbow problems
Carlow’s young manager Anthony Rainbow has his own problem, with one of their better footballers Dylan Hayden put off the panel for indiscipline. Brendan Murphy remains their marquee player, operating in the full forward line this season, but the former Sydney Swan may need to drift out the field for Carlow to gain parity in the possession stakes.

But any sort of improvement from Laois should be enough.

July’s British Open at Royal St George’s is cancelled 15:28
Club World Cup to be proposed as alternative to Champions Cup 13:33
German clubs resume training amid tight virus restrictions 12:17
Report says PGA Championship is rescheduled for August 12:12
All in the Game: Capello plumps for Calamity James over Joe Hart 10:20
Crossword Get access to over 6,000 interactive crosswords