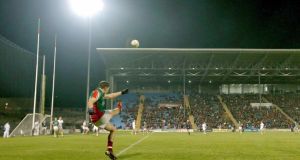 Losing games they feel they should have won has almost become habit-forming for Mayo who crashed to their fourth consecutive league defeat by losing a six-point lead to Kildare at McHale Park, Castlebar on Saturday night, before a crowd close to 7,000.

Selector Tom Prendergast, – standing in for James Horan, who had to leave after the game – said the team was just missing too many chances. He also cited a poor refereeing decision which changed the game.

“The goal was against the run of play and was a sickener coming at the time it did and the way it did.

“It was a poor decision which led to the goal but, instead of getting on with it, we got sidetracked by it and started arguing over it,” he said.

He said that, as withtheir matches against Tyrone and Down, this was a game they should have won.

“We played a lot of good football, but you just can’t afford to miss what we missed in this game, as we had lots of chances.”

Many of those chances came in the first half. Mayo spurned two goal opportunities but did kick six points clear before Niall Kelly got Kildare off the mark on 19 minutes.

Evan Regan, Jason Doherty, Kevin McLoughlin (free) and two on the bounce from Cathal Carolan had Mayo in full flow by the 16th minute, but that soon changed once Seanie Johnston began to assert himself along with the influential Niall Kelly.

By the interval Kildare had pulled ahead – 1-5 to 0-7. The goal was scored by Eoin Doyle but crafted by Johnston and John Doyle, Johnston also nailing three points, two from play.

Within a minute of the restart, Mayo had drawn level again with a free from Regan. However, the team failed to take advantage of other frees, with both Doherty and McLoughlin missing scoreable opportunities before Cillian O’Connor was drafted in to rescue the situation.

By then Kildare had kicked three ahead to make it 1-9 to 0-9 on 58 minutes. Doherty and Tom Cunniffe reduced the margin to a single point before Doherty missed an opportunity to level it with a free.

In the end Kieran McGeeney went to his bench, Eoin Dowling and Eoghan O’Flaherty, both on target, the latter coming in with the defining score three minutes from time, restoring a two-point gap just as Mayo appeared to have found their range.

“We are not contemplating relegation and we now have to win against Donegal next Sunday,” was the stoic final comment by the Mayo selector.