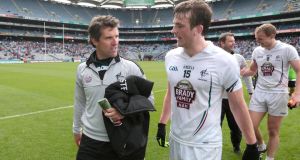 In counties like Meath and Kildare especially, Dub dominance prompts endless revisits to the drawing board and waste-paper bins full of scrunched up plans that didn’t work.

It’s only two years since this pair met in championship. Since then, both have changed managers and both have flushed out their squads. Meath return with just seven of the side that had six points to spare the last time they met, Kildare come back with just five. Even allowing for their respective injury lists, that’s a bruising amount of player turnover in only a couple of seasons.

That Meath win in 2012 was very much against the head at the time, confirmation of the worst failings of McGeeney-era Kildare. Since they could never be relied upon to win a game as underdogs, losing as favourites was a careless groove to get into. They got caught by an ambush powered by a slew of Meath youngsters who are two seasons older and tougher now.

The loss of Conor Gillespie – the outstanding performer on the pitch in that game – is a huge blow to Meath.

They were just about getting by without Eamonn Wallace and even Mickey Newman’s absence can be compensated for with Shane O’Rourke and Stephen Bray taking over the frees. But with Gillespie gone too, there’s no hiding the fact that as the game wears on, Meath’s depth is a matter of far less certainty than Kildare’s.

Jason Ryan’s side provided probably the most pleasant surprise of the championship’s early rounds. Energetic, purposeful and – maybe most surprising of all – accurate, they put Louth away with uncommon ease. Maybe more than any other side so far, they are hard to know what to make of.

A repeat of the Louth performance would see them through here but we know too much about old Kildare to trust in new Kildare just yet.

Against a full-strength Meath, you wouldn’t give them the nod. Against this one, they just about get it.