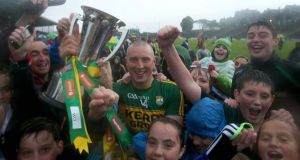 Kerry captain Kieran Donaghy with supporters at the end of the game. Photograph: Donall Farmer/Inpho

Oh mercy. They said Cork might struggle to rekindle the fire of 13 days ago, and so it proved, Kerry safely keeping the Munster football title in the Kingdom for another year.

In the fast fading light of the half-drowned Fitzgerald Stadium, the All-Ireland champions slowly wore Cork down to utter exhaustion. They had come to Killarney still searching for their first win over Kerry here in 20 years, and left looking as far away as ever.

In front a mostly drenched crowd of 32,333, it ended with Munster football title number 77 for Kerry - and as if completing the perfect night, with Paul Gavin in possession of the ball on the final whistle - the veteran comeback kid having come on for the last five minutes.

Still, it was into the second half before Kerry found their edge. Or on 45 minutes, to be exact, with the entrance “the Gooch” - Colm Cooper coming on for Kerry captain Kieran Donaghy, on 45 minutes, and not long after that he turned the game in Kerry’s favour for once and for all.

It came in the form of a goal from Paul Geaney, on 50 minutes, a quick free from Cooper, sent magically into the path of Donnchadh Walsh. His shot was saved by Ken O’Halloran, only for Geaney to pounce on the rebound and direct it straight back into the Cork net.

That put Kerry up 1-9 to 1-6, and they were never threatened again after that, James O’Donoghue tagging on one of his own before the end. Cork were held to a paltry two points in the second half, and without a score at all for the last 25 minutes.

So, it certainly wasn’t the spectacle of their drawn encounter, in every sense: the wet and gloomy evening had the surrounding MacGillycuddy’s Reeks blanketed under thick grey clouds, and at times on the field it was like playing Twister on a wet mat.

Still, love couldn’t tear them apart 13 days previously, and there was considerable anticipation: here, in their 25th meeting in 14 championships (which has included six draws), it started out in tug-of-war mode, neither team giving or taking more than an inch.

The first half hour then was almost perfectly even - the muted crowd reflecting the shadowy dominance between the teams. They were level twice in the first 10 minutes, before the immaculate free-taking of Bryan Sheehan began to edge Kerry in front (Sheehan also helped himself to a magnificent point from play).

Paul Geaney also chipped in with two points at that stage, so that Kerry went up 0-7 to 0-4 just before the half-hour mark. Cork’s forwards were living off smaller scraps: two frees from Colm O’Neill, one from Donncha O’Connor, and a rifle-shot of a point from Brian O’Driscoll was all they could manage in that 30 minutes.

All the while both teams spilled small buckets of possession, not all excused by the conditions, while some of Cork’s shots went more conspicuously off target.

Then, out of the proverbial nowhere, Cork were level again, 33 minutes in. Aidan O’Mahony spilled Kerry possession, for no reason, and from the resulting sideline, the ball was played out to O’Neill, who deftly passed on to Paul Kerrigan at considerable speed, his shot then perfectly placed in the top right of the Kerry net. The look on Kerrigan’s face captured the thrill of it

Moments later Stephen Cronin was denied a second Cork goal by the crossbar and the gentle flick from Kerry goalkeeper Brendan Kealy. Still, Kerry recovered a little nerve, and another free from Sheehan (brought forward yet again for Cork dissent) gave them the minimum advantage at the break, 0-8 to 1-4.

Cork manager Brian Cuthbert had made two late changes: Jamie O’Sullivan started at full back in place of Eoin Cadogan (and sticking well to Kieran Donaghy early on), while Paddy Kelly also started for Fintan Goold at midfield.

Into the second half then, and that momentum that Cork had gained slowly faded with the light, while Kerry found their shining path.

So, Cork must go down qualifier avenue, for a date with Kildare - and whoever comes out of that lined up to face Dublin in the quarter-finals.

Kerry, meanwhile, can sit back and relax until their quarter-final against either Fermanagh or Westmeath.