Kerry ready for work ahead after Mayo call shots 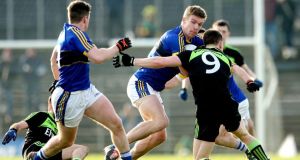 The sunsine bounced off the frozen Reeks, as Fitzgerald Stadium hosted opening day in this year’s Allianz Football League. There wasn’t much novelty to be illuminated, however, but it was a satisfactory afternoon for Mayo’s new management with a first win in Killarney – a curious statistic but it was only their third match at the venue.

“A new regime coming in – you always want to start with a win,” said joint-manager Noel Connelly. “It builds confidence. If we were travelling up the road this evening on the back of a defeat, it would make it hard going in on Tuesday night. Now it’s that much easier.”

It’s nothing new for Kerry to start a campaign poorly as champions and they haven’t followed up a Sam Maguire success with an opening-day league win since 1997.

Manager Eamonn Fitzmaurice acknowledged that Mayo had been the better team but wasn’t too despondent given the short amount of time the team had to prepare since returning from their team holiday last month.

“It’s the first game we’ve lost since last April against Cork in Tralee, so it is disappointing. Mayo were just better than us. You can see they are further ahead; they have a bit more training done than us.

“They took their goal chances well but we have to be realistic that we haven’t a whole lot of work done yet, but we have to try to get another week’s work under our belts and get ready for Derry.”

The match was as patchy as might have been expected between two top counties returning to action. Two goals, one in either half, decided it for Mayo, their arrival serendipitously re-shaping the match at stages when Kerry looked to be on top.

Fortunes fluctuated with performances at centrefield. Early on, David Moran and Bryan Sheehan were conduits as Kerry pushed forward and after the first quarter’s play they led 0-3 to 0-1.

By then, the match had been in progress for over 20 minutes after a protracted injury stoppage to allow Evan Regan, scorer of Mayo’s first point, to be carried off after he had collided with Johnny Buckley and Mark Griffin. Regan was later treated for a broken collar bone and concussion.

In a peculiar post-script, Connelly explained that the Ballina forward had been treated as a blood injury because of a split lip, allowing the team to deploy a full complement of six replacements during the remainder of the match.

Pat Holmes, the other joint-manager, told local radio that Mayo had checked this initiative with the fourth official.

Neither team demonstrated great accuracy in feeding their forwards – credit to Kevin Keane for his work on Paul Geaney but the Kerry full forward laboured under a succession of over-hit passes.

At their best, Mayo managed to put together some good running and support play, especially after Séamus O’Shea and Donal Vaughan took a grip in the middle.

The key score of the first half came in the 24th minute when Alan Freeman glided in from the corner and out-ran Griffin along the end-line before finishing to the net.

That pushed Mayo into the lead, 1-2 to 0-3, and they never lost it. Three unanswered points before half-time gave the visitors a healthy 1-7 to 0-4 advantage at the break.

Kerry made a significant switch at the break, bringing on Tommy Walsh after his five years of exile in the AFL. Starting at centrefield, he impressed right away, taking a number of catches as the home team finally developed some momentum and answered Séamus O’Shea’s early point with four in eight minutes – Michael Geaney, Barry John Keane, from play and a free, and a 45 from captain David Moran.

Mayo brought on Aidan O’Shea and he played deep to supplement the team at centrefield and the momentum switched.

Within three minutes of his arrival, the team struck for the decisive score, a good move between Mark Ronaldson and Kevin McLaughlin, finished by the latter getting past Paul Murphy and driving in the goal to restore a six-point advantage, 2-8 to 0-8. Mayo added a further point to close out the match.

There was further concern for Kerry with the withdrawal in the dying minutes of Walsh, who had moved in to full forward for the final 10 minutes, because of what Fitzmaurice said afterwards was a dead leg.

Shane Enright was the only withdrawal before the throw-in, a calf injury necessitating his replacement by Jack Sherwood.

“It’s nice to get a win. We had a few new lads and the fact that they played well was good. We competed well all over the field. Anytime that happens, you have a chance. We did well on the counter-attack at times, which was encouraging too.”