Kerry joy as they pass their toughest test of summer 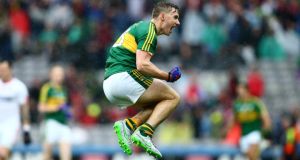 Well, Joe Brolly, what do you think of that? Last year’s booming riposte by Kerry’s Kieran Donaghy might well have served for all of Tyrone in the floodlights in Croke Park as the most maligned team in the country at last gave this football summer a game to remember. Nothing in their championship life this summer became them like the leaving of it.

This fascinating semi-final will go down as the day Kerry exorcised a decade of demons by beating their Ulster nemesis in headquarters. But have no doubt: the aristocracy was spooked here. The scent of garlic cloves drifted down from the Killorglin and Waterville sections of the crowd after Peter Harte brought Tyrone roaring back into contention with a 60th-minute penalty resulting from one of their scything counter-attacks.

That left it 0-14 to 1-10 and nightmarish visions of yore must have been tumbled through the minds of the Kerry faithful, if not their players. For a short time, it seemed like the worst was happening again.

Mickey Harte engineered another perfect formula to unseat the All-Ireland champions and his players lacked only the precision to carry it through. Kerry ran their vaunted bench but still couldn’t shake Tyrone off. And when Mark Bradley levelled matters with a stunning point in the 63rd minute, Éamonn Fitzmaurice must have thought that only the introduction of Dr Abraham van Helsing could make Tyrone lie down. He wasn’t listed. Fitzmaurice didn’t panic: he sent on Barry John Keane instead.

The Kerins O’Rahilly man ping-ponged about the place in the six minutes he got and then stepped into space to snap a fine 71st-minute point which sealed the day for Kerry on a score line of 0-18 to 1-11.

If Kerry were irresistible against Kildare, then their best quality here was their icy refusal to be distracted. Still, Harte’s team tried, as they always do. From Colm Cavanagh – who gave his greatest ever performance for Tyrone yesterday – helping big Justin McMahon blot out Kieran Donaghy to fine-tuning a running game which yielded four goal chances to isolating speedsters like Darren McCurry and Connor McAliskey, Harte dragged Kerry into an unfamiliar world.

James O’Donoghue was scoreless from play and Colm Cooper managed just a point in the open. Johnny Buckley crafted three fine early points and they were needed for Kerry.

Marc O Sé was gone with a black card for dragging down McAliskey after 16 minutes. Big Donaghy did not reappear after half time. The weird sight of the floodlights sparking on an August afternoon along with the driving rain and the emboldened Tyrone voices contributed to a feeling among the crowd of 53,044 that something unforeseen was materialising in the gloom.

So Kerry’s cold concentration through the tumult of the last 10 minutes was all the more impressive given the history.

They thought and played their way through the haze of Tyrone invention and opportunism. Anthony Maher drifted into a pocket of space and calmly kicked a right-footed point. Then Killian Young ventured into the same area and landed another. Colm Cooper was clattered and from the free Kerry went three up.

Finally, Keane’s point allowed Kerry men to loosen their grip on the railings. In between those scores, Tyrone failed to land three huge long-range frees after their raids were halted by unapologetic Kerry fouls just beyond the 50-metre line. Maurice Deegan, the referee, ought to have issued a black card to Shane Enright for one of those and further incensed Tyrone sensibilities by booking Padraig McNulty in the 66th minute for a dive when he was dragged down in the square. These were huge calls.

“I was five feet from it and it’s just so hard to take,” said Sean Cavanagh. “You don’t want to be a sore loser but you wonder if that was the other end whether the same decision would have happened. There’s been an awful lot of negativity around this team and it’s not for me to say whether that’s been fairly or unfairly. All we’re looking for is fair play.”

It is true that their reputation has done Tyrone no favours. But they wobbled at a vital moment here too. Niall Morgan, their goalkeeper, and Darren McCurry, a handful all day, couldn’t find the range for those definitive frees and in reminding the country of all that is good about them, Tyrone fell short. “It was a ferocious battle,” Fitzmaurice said.

“I think you have to give great credit to the players. They dug deep. We have been in tight spots before and there was no panic. Fellas kept trying to do the right thing.”

For Kerry, it was a champions’ performance. So the most charged rivalry of the modern era lit another stick of dynamite. It was badly needed. Kerry march on to what Fitzmaurice refers to as “four weeks time”. Mickey Harte heads back to Ballygawley to plot a further season. His agreeing to remain with Tyrone for another year would seem a formality.

“Well, I haven’t said I’m going away,” he said enigmatically.

Kerry may not have escaped that web just yet.