Kerry finally get past Mayo after extraordinary encounter 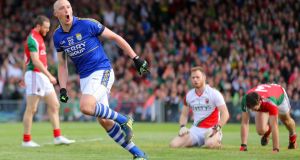 Kerry’s Kieran Donaghy celebrates scoring a goal during the All-Ireland semi-final replay against Mayo at the Gaelic Grounds in Limerick. Photograph: Cathal Noonan/Inpho

A truly extraordinary match in Limerick this evening eventually laid waste to Mayo’s current great quest for the Sam Maguire. Kerry, in the latest incarnation of football’s most enduring power, rounded off an epic All-Ireland semi-final with the scores that drained the energy from the Connacht champions.

Once again their latest avatar James O’Donoghue led the way with 2-6, managed a decisive intervention in defence, ran hypnotic rings in attack – despite some wonderful defending by his marker Keith Higgins – and even had time for a couple of early wides.

David Moran again confounded Mayo’s expected superiority at centrefield with another terrific display and having been initially dropped, Marc Ó Sé was fetched on an emergency call at an early stage and went on to have a fine match.

After all the controversy about venue and averted suspension that ran through the week, it was again the mesmeric quality of the contest that captivated the crowd of 36,256.

It culminated in extra time and the end came wrapped in the almost anti-climactic material of three superbly taken points from replacement Jonathan Lyne, who book-ended the sequence with two, and full forward Paul Geaney, brought back into the fray for the last 10 minutes.

No-one would staked much of value on Mayo not conjuring up something but they were flat out and as the unforgiving minutes made a goal a necessity, Kerry dropped back and shut it out. There was late drama – including a one-man pitch invasion which was dealt with by a swarm defence from the stewards – with two frees for Mayo but Cillian O’Connor wasn’t able to guide the ball through the thickets in the square as time ticked away.

Worse followed for O’Connor, who kicked out at Killian Young after the second and likely last opportunity had presented itself. He was red carded – a depressingly uncharacteristic finale for a player who had shone over the two matches – and the free cancelled.

Kerry won the throw-in and celebrated as lustily as they ever have the winning of a semi-final.

It was an electric match, surging one way and then another. Like the drawn encounter in Croke Park six days ago, each side had reason to believe they had broken the back of the other’s challenge.

There were as anticipated changes before throw-in. Kerry surprisingly dropped Ó Sé and brought in Young in defence. Less surprisingly Stephen O’Brien was declared not fit and Kieran Donaghy brought in to start.

Mayo managed to change the team announced yesterday at lunchtime and started Barry Moran at centrefield, in place of Jason Gibbons.

These changes proved significant but Kerry continued to suffer leaks in the full-back line – except once again with Shane Enright having difficulties with Cillian O’Connor, Ó Sé was togging within 22 minutes after the Mayo forward had scored a second goal.

Another trend from the drawn match was the anxieties being caused Mayo by Donaghy. These were deepened by the sheer volume of ball Kerry were able to dispatch into the forwards during the first quarter. Were it not for some very poor finishing the Munster champions would have been considerably farther in front than 0-2 to 0-1 by the 15th minute.

A slew of wides distorted their almost total domination of possession and attacking territory.

Within minutes the match had turned against them. In the 19th Aidan O’Shea drew jeers when what looked like an optimistic shot at a point drifted well wide into the strong wind. But it was held up and dropped for O’Connor, who was taken down by Enright for a penalty, which he converted for 1-1 to 0-2 lead.

O’Connor added a free and Mayo began to find a higher pace and rhythm. The same combination struck for the second goal in the 21st minute. O’Shea’s great catch and drive created space for a pass into O’Connor and he took the chance at the second time of asking before adding a further free and a match in which they had been struggling now saw the Westerners leading by seven, 2-3 to 0-2.

It wouldn’t have been in the character of the semi-final for such an early initiative to be decisive and sure enough Kerry re-assembled. A point from Paul Geaney was followed by their first goal, Donaghy reacting fastest to a ball that spun up from Higgins’s block on O’Donoghue.

At the break Mayo led by a goal, 2-5 to 1-5, which didn’t feel enough for the strength of the breeze.

There was even drama at half-time. Aidan O’Shea and O’Connor had collided just before the break and were apparently on a lengthy blood-sub break, which meant neither started the second half although both eventually re-entered the fray.

Once more Kerry made the early moves. After blood sub Alan Freeman had stretched Mayo’s lead the Munster champions lashed off 1-3 without reply. O’Donoghue was at the heart of the response: fouled for a penalty, which he converted to add to two points.

At 2-8 to 2-6 Kerry again had the whip hand but the lead was whizzing back and forth with the rapidity of a table tennis exhibition.

Brian Kelly in the Kerry goal couldn’t hold a ball dropped in by O’Connor and it came off Kevin McLaughlin’s shoulder for Andy Moran to fist home.

Replacement Michael Conroy and Donal Vaughan tied it up before the end to bring the match to extra time.

In the end it was postponing the inevitable but their early efforts in the additional period promised better. Early points from O’Connor and McLaughlin gave them a lead that Barry John Keane cancelled with a couple of frees. But it would be their last throw of the dice.