Jim McGuinness: Education proved the key to unlocking opportunity on and off field

‘The notion of PE teaching was appealing to me but only as a very vague dream. I might as well have decided I wanted to be an astronaut. I didn’t even have my Leaving Cert’ 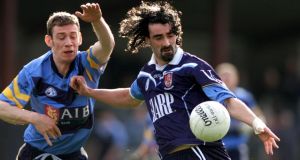 Jim McGuinness in action for UUJ against Noel McGuire of UCD during the 2001 Sigerson Cup Final. Photograph: Tom Honan/Inpho

After winning an All-Ireland medal with Donegal in my first year on the squad, I played on teams that lost Ulster finals in 1993, 1998, 2002 and 2004. It was a strange experience, going from that unreal high point of having seen the glory to gradually slipping and slipping to the stage where we seemed to find new ways of losing those hugely important games. At the same time, I was in my twenties and trying to figure out what to do with my life.

When we won the All-Ireland, it was the era of “jobs for the boys” and a few of us got positions with Eircom. It was good money for work that wasn’t at all demanding. The big thing I learned at Eircom was how to play 25. I went from being clueless about cards to being fairly handy. And it was nice to have a steady pay cheque coming in and hours that made it easy to get to training.

But I had a nagging feeling at the back of my mind that I wanted to do something different with my life. The notion of PE teaching was appealing to me but only as a very vague dream. I might as well have decided I wanted to be an astronaut. I didn’t even have my Leaving Cert. So I had a conversation with my mother about it. I couldn’t go back to the comp in Glenties. I just couldn’t face that. But someone told me about an adult education course in Letterkenny.

And that rang very true for me. I decided to do it there and then. Within a few months, at the age of 22, I was back in a classroom. Except this time, I was excited about it and I was open to hearing what was being said at the top of the room. It opened up an entire new world for me. Going back to school was easily the best thing I have done in my life. I devoured the course. When I phoned my parents to tell them my results, they thought I was winding them up.

That summer I found myself going through the same dilemmas that most students have in their teenage years. I had hoped to go to Jordanstown, but I wasn’t accepted. And that was a crushing setback. Then I got a call from Tralee. At the time they were looking to recruit students who played football and I was eligible because I was on an access course as a mature student and was classed as an elite footballer.

I drove down on a Sunday evening in the autumn of 1997 and my head was filled with doubts. My first class was the following morning and walking onto that campus was one of the most intimidating moments of my life. Everyone looked so young and they were all very confident. They seemed to know precisely what they were there for and where they were going. And they seemed to know one another. I stood at the door of the main entrance hall and there was this sound of voices and laughter bouncing off the walls and the notice boards were crammed with bits of paper, and all the students were carrying bags and folders and they were going places while I felt paralysed.

And I had the exact same feeling that I used to have in school in Glenties. This voice telling me: This isn’t for me. I don’t belong here. This is for other people. So I turned on my heels and I sat down on a grass verge and imagined myself driving back up the road home. It would be easy. It was very appealing. I didn’t even have my suitcase unpacked. I could be home for dinner. So I was having this conversation where I was consoling myself. Look: You did the Leaving and you did well to get it. But this is too far beyond you. There’s no shame in that. And as I got up to walk to the car, this guy who ended up becoming a friend, Joe Dunne, cut across my path and said: “You’re Sports Science, aren’t ya?” He must have known me from football or something. “C’mon, I think we’re in this room down here.” I followed him through the corridors and sat down at the desk and got through my first lecture.

Within a few days, I had met the other football players and had settled. But I would have been away up the road had it not been for Joe and I doubt I would have come back. I did two years in Tralee and then got accepted for Jordanstown on a scholarship. And again I went through the same cycle of doubt. Jordanstown was a university, and that held different connotations. But it provoked the same fears.

No way would I be able for a university. But I made myself go along and one of the lecturers there, Mary Margaret Meade, opened my eyes to the power of sports psychology and that led on to a master’s at John Moores University in Liverpool. Even then, it was the same voice: Jim McGuinness, who couldn’t sit still in school, doing a master’s – who are you codding? And Liverpool turned out to be the most enjoyable experience of all because the lectures were inspiring. By the end of those years, I was left with an unbreakable conviction in the power of education. I went from being someone who didn’t lift a book to someone who loved reading and just wanted more and more information.

Education empowers people. It can actually make you a different person – more rounded and cultured and self-confident. If I ever met someone in those years who mentioned that they were thinking of going back to school or college, I would do everything I could to try and convince them to.

So I felt I was moving through two worlds: education and Donegal football. I drove up and down the road to Tralee in a clapped-out car, weekend after weekend. Donegal had good teams and we started every year with general optimism that we could do something, but then each year we seemed to be moving slightly further from the epicentre of 1992.

And every year we began to lose more and more players from that team. Noel Hegarty, a great, great player from Glen, retired after we lost a qualifier match against Kildare on a hot evening in Newbridge. We all knew he was finished and when Noel sat down we were all looking at him half expecting this big emotional speech. Noel just spread his arms out like a priest and shouted: “Hal-le-fucking-lu-jah!” I thought it was one of the best things I ever heard. He had got through: he had put in his time with the county and he could walk away now with his head held high. And that was Noel.

Teams are funny like that. The change is so gradual that it is almost invisible, but it seemed like no time at all had passed from my being a kid on the substitutes’ bench when we beat Derry in the Ulster final of 1992 to being a midfielder when we played them again on July 19th, 1998.

Crunch time for Connacht as they chase Pro14 dream to South Africa 01:00
Munster were fever-tested when they arrived in Italy 01:00
Pep Guardiola believes Man City deserve some luck in Europe 22:30
Barcelona nab away goal after going behind in Naples 22:19
Bayern Munich teach youthful Chelsea a European lesson 22:08
Crossword Get access to over 6,000 interactive crosswords