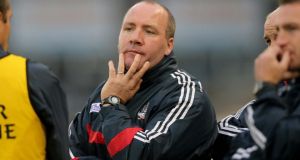 Dejected Cork manager Brian Cuthbert: “Cork were asked to take part in a race on Saturday night from a standing start while their opponents were already sprinting.” Photograph: Donall Farmer/Inpho

Cork exit the All-Ireland football championship under a heavy cloud of disappointment and analysis of what is ‘wrong’ with their team. I wasn’t entirely surprised they were beaten by Kildare because of the context in which that match was played. We saw Cork becoming the latest victims of a championship structure which is at its most unforgiving for the teams which lose in provincial finals.

Last week, I was amazed to see Cork were being quoted on odds of 4/1 on. I felt they would do exceptionally well just to scrape past Kildare because they didn’t have what was the most important factor to allow them to recover from their defeat to Kerry: time.

I can understand the extreme disappointment for Cork GAA fans and the general frustration that their football team has not gone further in the championship. This wasn’t just a defeat by Kildare: it was a collapse. And it should be pointed out that nothing about Cork’s form all year suggested that they were prone to that. But everything needs to be taken into consideration.

We can’t underestimate or forget that this was a team who had lost a Munster final replay seven days earlier in absolutely horrendous weather conditions. And as members of the Kerry squad conceded, Cork were unlucky not to have won that drawn final. So they were dealing with those cumulative disappointments and setbacks on Saturday evening.

Against Kildare, they lost their key man marker, James Loughrey, to a black card. Then they saw Alan O’Connor, a towering figure in that drawn game, stretchered off the field with a serious injury. These were serious blows to a side whose morale was clearly fragile. So things unravelled and Kildare ran away with the game.

I believe the nature of Cork’s defeat is only explicable through the consequences of losing the Munster final replay to Kerry.

I was only involved in one qualifier game with Donegal. That was against Laois. We had just lost the Ulster title we had held for two years in a very physical, confrontational match with Monaghan seven days earlier. We went to Carrick-on-Shannon to meet Laois and we were expected to win but it became a huge test for us. You do feel vulnerable in that situation – and opposition teams can sense that. After a big defeat, players question themselves and management probably does too.

For months, you are planning to win a provincial final and thinking in terms of the joy that that would bring and then a quarter-final. All of that is abruptly ripped away and you find yourself in a completely different space. The infusion of confidence that comes with winning the provincial title isn’t there to draw on. That is a form of self-validation for teams. And it evaporates. So you are searching for your identity and you are questioning yourselves individually and collectively.

For us, it was a massive task to overcome that vulnerability and to drive forward with the same intent after losing our Ulster title. But we just about managed it that evening. In this instance, Cork couldn’t regroup and paid a heavy price.

Let’s just rewind the clock, for the sake of argument. Go back to the closing seconds of the drawn game against Kerry. What if Cork had held on in that drawn game? Or if Fionn Fitzgerald’s late score had fallen into the square – which may have been its intended destination – or gone wide and Cork got over the line on that first evening? Cork would be waiting there in the quarter-final as Munster champions. Who in the country would want to play them now? The Cork guys were so close to realising that and they almost had their hands on the Munster cup. So that draw, after a match they poured everything into, was a huge setback to absorb.

Have a look at what Cork did in a season that will be remembered now as a write-off. When the league ended, they stood on top on their own on 10 points. They scored 10-89 in seven games. The teams they beat included Dublin (1-16 to 0-15), Monaghan (2-14 to 1-16), Mayo (2-07 to 0-12) and Kerry (3-17 to 2-9). So they beat all of the eventual provincial champions for 2015 and the reigning All-Ireland champions in the league. They also beat Tyrone. They played Donegal in the league semi-final and put four goals past them, which is the first time I remember that happening. Okay they eventually lost the final to Dublin by 11 points but this is not a bad football team.

Then they go and prepare for Kerry. How many teams would realistically feel they have a shot of going into Killarney and beating Kerry? Very few teams could contemplate doing that. Cork came within a whisker.

But I believe he has come in for fairly incessant criticism over the past two seasons. This defeat against Kildare offers further fuel to those who wish to criticise both the team and the manager. But it needs to be set in the context of the situation. A Munster title would have changed the entire perception of Cork and Cuthbert: the general discussion would now be about the fact that he had got the tactics right and how he had steeled a team to go into Fitzgerald Stadium and claim a win which hadn’t been done in two decades.

Instead, after two big, summer-defining games against Kerry in front of a full house, Cork found themselves playing in front of 3,815 people on a wet Saturday night in Thurles. It must have felt like they were in an entirely different competition. It must have felt like a league game in February. And they couldn’t respond, probably for a whole series of reasons. Cork were asked to take part in a race on Saturday night from a standing start while their opponents were already sprinting.

This is unfair and it is one of the reasons why I have spoken about the need for a new structure for the All-Ireland which will make league form relevant, retain the provincial championships but which also then allows for an equal playing field for all teams: 16 teams in two tiers with teams seeded from 1- 16 and knockout games. No safety net to give the bigger counties a second chance. And – this is the crucial thing – no situation where one team is building psychological momentum while another team perishes. That levelling of circumstance would bring a cut and thrust and a true edge to the competition.

But it takes time to build that. Look at the teams now arriving at the back door. Tyrone were knocked out of Ulster on May 17th by Donegal and have been building away steadily since, feeding off each win. They are coming now and look more dangerous by the week. So you have to ask the question. Is it fair that a team beaten early in a competition has an advantage over a team that has progressed? It is clearly more advantageous to get beaten in the first round than in a provincial final.

In the system I proposed, Cork would have been ranked number one in the seeding because of their work in the league. And they would have deserved that. I believe in knockout football: people going to a championship game knowing that if they lose tonight, it is all over.