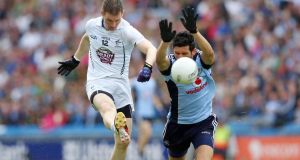 Cian O’Sullivan’s move to the Dublin midfield has proved, so far, to be hugely successful. Photograph: Inpho

There are times that you have to beware of the quiet ones. Dublin should bear that in mind. Although they come into tomorrow’s match with a swagger – which is what confidence and winning does to a team – there is an admirable stealth about Meath which suggests this Leinster football final won’t be the foregone conclusion that the hype would suggest.

Yes, I do think Dublin will win. Yes, I think the team has improved in a number of areas in Jim Gavin’s reign already compared to Pat Gilroy’s. However, I also like the approach of Meath under manager Mick O’Dowd who, in his first year, has brought a quiet resolve to the team and has set targets step-by-step. So far, without much hullabaloo, he and his team have managed to tick the boxes.

Dublin’s improvement as a team under Gavin are noticeable in a number of key areas: 1) Stephen Cluxton’s kick-outs are even more accurate and are increasingly effective as launchpads for attacks; 2) the defence is working the ball out at real pace and, as a result, they are more difficult for opponents to close down; 3) there is greater mobility around the middle of the field, with Cian O’Sullivan’s move there proving, so far, to be hugely successful; and, 4) the forwards are moving, man and ball, as a unit with less selfishness and no over-dependency on one man.

Meath will come into this game with not many people giving them much of a chance against a Dublin team who hit the ground running in the league (capturing Division One) and who have if anything increased the momentum since the championship got under way. That is a mistake. Meath’s tradition will make them put it up to Dublin.

I’m sure Meath’s backroom team will have scrutinised the videos of Dublin’s facile win over Kildare. There is no way that they will be quite so naive in going man-on-man, as Kildare attempted.

Close down
If Meath are to give themselves a chance to win they need to do a number of things: 1 – close down Cluxton’s kick-outs to at least come away with 50/50 possession and, certainly, Brian Meade and Gillespie offer an aerial threat in that regard; 2 – the half-forward line will, to a man, have to put in a huge amount of work as defenders and track back to ensure that Dublin’s wing-backs Jack McCaffrey and James McCarthy aren’t allowed to go on those now trademark runs; 3 – Eamonn Wallace, who is probably the quickest man on the field, will have to come out the field and use his pace into the spaces created.

So far in the championship, teams from the lower league divisions have struggled to match the top teams. This is a big step-up for Meath and the sheer pace and tempo that Dublin bring to their games will be like nothing that this developing Meath team have ever encountered before.

When Meath get the opportunity to play fast, direct football, they need to take advantage. They have some top-class forwards in Stephen Bray and Graham Reilly and Mickey Newman is more than just a freetaker. They need to get turnover ball and move it quickly – with the foot – into the attackers if they are to have a chance.

All in all, however, Dublin hold all the aces. There is a ruthlessness about Dublin that reminds me of Kilkenny’s approach of the past decade. When there is a chance for a goal, they go for it and, although Paddy O’Rourke is a big presence in the Meath goal, I fear he is in for a very busy day. It is a big ask for a developing Meath team, one that has progressed this season, to beat Dublin.

The quality of Dublin’s play was evident against Kildare and the focus seems to run right through the squad.

You have 15 players starting who know they must keep up that standard or they will be replaced. Indeed, the difference between the two benches in the Leinster semi-finals was marked.

Joe Sheridan struggled to get up to the pace of the game when Meath brought him on against Wexford; whereas, in contrast, Eoghan O’Gara (who is a much-improved player this year and over his injury), Kevin McMenamin and Dean Rock were right up to pace straight away.

I expect Meath to battle hard, but ultimately this should be another step forward for Dublin in confirming their provincial dominance as theymove on to the next phase of the All-Ireland series.

In the qualifiers, Kildare were so poor in losing to Dublin that pride is at stake for their match with Louth and I think they will bounce back, helped by home advantage. Cavan were unlucky to lose out to Monaghan and should edge out Fermanagh.

Losing to London will have sapped Leitrim’s spirit and taking on an improving Armagh could prove beyond them. Wexford, who faded against Meath last time out, will find it very tough to go to Longford and win.