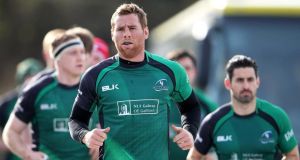 Eight months after the furore and anticipation which surrounded Gavin Duffy’s conversion from rugby international to Mayo gaelic footballer the 32-year-old had finally been named to start his first competitive game for the county on Sunday.

Unfortunately though an injury picked up in recent days led to his withdrawal from the squad, replaced in the team by Alex Corduff in what was the only Mayo change to the named team.

The 10-time international capped fullback was much heralded by former Mayo manager James Horan upon his decision to join the Mayo panel last year, with his athleticism and professional approach being touted as a secret weapon, of sorts, for the county in their long-awaited pursuit of the Sam Maguire.

The former Connacht captain featured for Galway club Salthill Knocknacarra during the summer, and before opting for a career in rugby had been a promising Mayo minor alongside the likes of Alan Dillon and Billy Joe Padden.

According to his team mates, Duffy made considerable strides in improving his skillset throughout last summer, and by the time Mayo were knocked out of the championship by Kerry in the All-Ireland semi-final he was beginning to be considered for the match-day squad. So, perhaps 2015 will be the year GAA fans will get to see the former rugby player grace Croke Park.

Mayo have also welcomed back goalkeeper David Clarke for the visit of Sligo IT, who this year have Galway’s Shane Walsh and Donegal’s Ryan McHugh within their ranks.

The former Mayo captain has missed the last two years through injury, placing his intercoutnty future in doubt, so the news of his return will be welcomed. In former All Star nominee Robert Hennelly and Clarke, Mayo have two top class goalkeepers. Regulars Donal Vaughan, Barry Moran, Kevin McLoughlin and Alan Freeman also started Sunday’s encounter.

Meanwhile, Kerry minor starlet and nephew of the great Pat Spillane, 18-year-old Killian Spillane, has been named in the Kerry squad for their McGrath Cup encounter with Tralee IT. The youngster is a target for AFL recruiters and last month attended a combine held by Tadhg Kennelly in DCU.

Ospreys come from behind as Connacht’s home woes continue 17:38
Here is your handy guide to sport on television this week 17:01
Charles Byrnes can saddle runners ahead of appeal against six month ban 17:00
Leicester’s second-half barrage blows Brentford away 16:51
Joe Root’s mammoth vigil ends on final ball of the day 15:00
Crossword Get access to over 6,000 interactive crosswords