Tribesmen to meet Cork after impressive win at Pearse Stadium 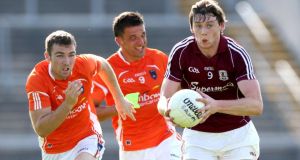 Galway 1-11 Armagh 0-09: Free-scoring Armagh saw their All-Ireland campaign come to an abrupt halt against Galway at Pearse Stadium this evening.

The Orchard County had impressed in their two qualifying wins over Wicklow and Leitrim thus far, scoring 10-34 along the way, but they met their match today.

Galway had a far trickier time of it in their wins over Tipperary and Waterford, but produced a solid performance, in the first half especially, to win by five points.

Danny Cummins’s first half goal was the crucial score for Galway. It put them four points ahead at a key stage of the opening period, and Armagh were never able to recover as Galway kicked on from there and powered to the victory.

Alan Mulholland’s side hit the first score of the game through Johnny Duanne after three minutes, and they never relinquished their advantage as they lead the game from start to finish.

They were 0-3 to 0-2 ahead midway through the first half, Tony Kernan and Caolan Rafferty hitting points for Armagh in response to two Galway scores from Michael Meehan.

Cummins’s goal on 24 minutes saw Galway take control and move four clear. He fisted a free from Paul Conroy to the net past Armagh goalkeeper Philip McEvoy, and four points remained the gap at the break, Galway leading 1-6 to 0-5.

Armagh made a good start to the second half, and continuing a strong finish they made to the first half, they made it four points in a row, cutting the gap to two after points from Stefan Campbell and Ethan Rafferty.

However, Galway weathered the storm and after two frees from Meehan, the home side lead by four points going into the final quarter. That lead went out to six when Gary Sice pointed for Galway with less than 10 minutes to go.

Armagh battled, but were only able to managed one more point before the finish and that meant Galway progressed to Round Four, where they will play beaten Munster finalists Cork.