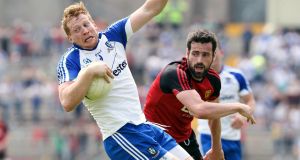 Monaghan’s Kieran Hughes was a constant threat when in the danger area against Down last weekend. Photograph: Andrew Paton/Inpho.

With the vast majority of kick-outs in the modern game going short the value of winning contests in the middle of the park has been massively deflated. And with less and less ball being cleanly fetched – that for the most part refers to the ability to win breaking ball.

Monaghan showed last Sunday though that even with most restarts being placed securely on a player’s chest or bouncing in front of them – winning those which are up for grabs is still paramount in gaining the upper hand in the territory stakes.

In their defeat of Down in the Ulster championship Malachy O’Rourke’s team kicked 61 per cent of their kick-outs short. Between the two teams 47 per cent of them went short or found a man uncontested in his own half.

Showing that the first preference was to find a man and retain possession, as is the case for the most intercounty teams at present.

From those battles won – Monaghan managed to engineer a shooting opportunity 81 per cent of the time. Scoring six times within that.

Down’s hand was forced with Monaghan looking to push up on them and force as many kick-outs as possible long. 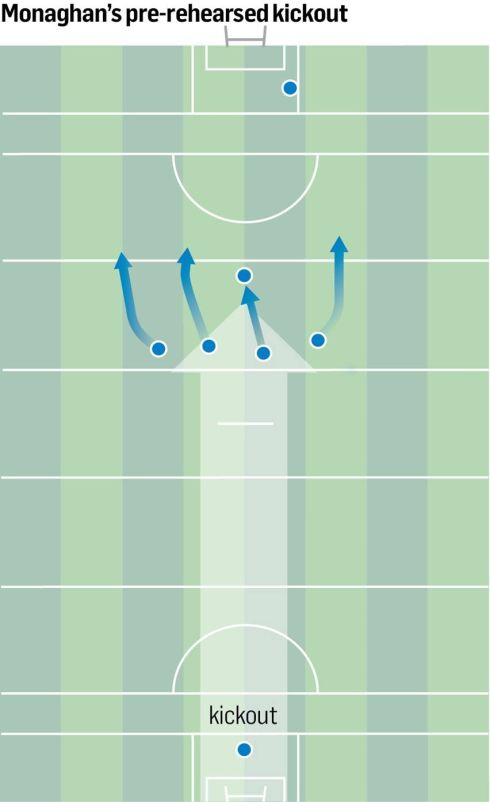 Eamonn Burns’s team lacked the necessary movement and organisation to consistently engineer space for short restarts. Then, often preoccupied with remaining in their defensive shape rather than commit, they were outdone under the breaks.

The reigning Ulster champions’ ability to read and fight for that hot ball coming off the jumpers in midfield led to them winning 60 per cent of all the kick-outs over the 70 minutes. Certainly a key factor in their 19-point win.

On average they committed over three men to the breaking ball contests in which they won, although at times this rose to six men coming in from different angles to cluster around the jumpers.

Their cause was aided when Down lost midfielder Peter Turley to a black card early in the second half. The big midfielder was one of only four Down players to win a breaking ball from a kick-out during the game – defender Darren O’Hagan actually won 63 per cent of his team’s breaks – while Turley was also responsible for three turnovers.

For Monaghan Darren Hughes and Kieran Duffy were the main men in the battle for breaking ball. Hughes, who lined out at midfield won six breaks, Duffy won four, and regular dirty ball lieutenant Dermot Malone got his hands on the next most with three.

Hughes’s deployment in the middle sector was vital, where he was a constant outlet, broke tackles, won possession, and picked up excellent defensive positions.

It also freed up his brother Kieran for an inside role – almost three-quarters of the full forward’s involvements came inside the opposition’s 21-yard line. And while in the second half he did do his usual “floating about” around the middle sector, he looked a real danger when fixed in the danger area.

An interesting impact he made while coming out the field was under Monaghan’s first kick-out of the second half.

In what appeared a clearly pre-rehearsed move, the inside line of Conor McManus and Hughes split with the latter running out for a long kick-out, isolated down the centre while McManus stayed right in on the square.

The four remaining forwards who had dropped deep came sprinting towards Hughes, with the closest collecting the break/tap down while the others ran in different directions into the vacant forward line. The break was quickly snapped up and delivered to Ryan McAnespie who took his point despite the overlap.

It was that kind of attention to detail that did, as it has done so far in the 2016 championship, highlight the gap in quality between the top teams and the chasing pack.

Last Sunday Monaghan showed how important the desire to win breaking ball still can be. A coherent kick-out strategy is a must and most kick-outs within such will go short, yet the ability to read and fight for breaks in the engine room is no less a game-swinger as a result.