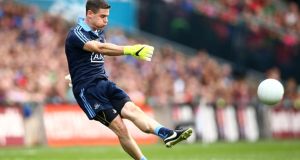 In last Sunday’s drawn game Mayo showed how to, and how not to approach Stephen Cluxton’s scrupulous kick-out plan.

In the first half of that drawn game Mayo applied a zonal marking approach to try and deal with Cluxton’s restarts, although this was applied with a focus on their execution rather than any channelled intensity. As a result Dublin made eight successful short kick-outs from eight attempts.

After the break Mayo began to push up, going man for man and then pressurising the isolated receiver in numbers; they created scoring chances from all bar one of the turnovers they forced.

Such was Mayo’s restrained first-half approach that the first three kick-outs went into more or less the exact same right corner back slot. Fifty per cent of the Dublin kick-outs during the first half landed in the same zone and not one crossed the Dublin 45 metres line.

In the second half when Mayo pushed up they turned over 40 per cent of Cluxton’s kick-outs – the pressure being reflected with his misplaced restart for Andy Moran’s 70th-minute equaliser. They'd gone from winning no first half kick-out to winning two of the opening three restarts after the interval.

Cluxton’s options were reduced and he went long with four of the 15 second-half kick -outs, three of which Mayo won. All three of those led to attempts for scores with one of them being converted. 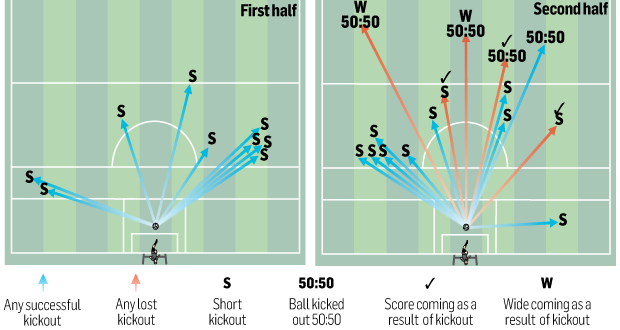 Dublin’s goalkeeper was forced to vary the direction and length of his kick-out with Mayo punishing him upon anything less than a perfect delivery. From the six kick-outs turned over, Mayo scored three times and had two wides.

No doubt Mayo’s initial decision to set up as they did was done with an eye on being prepared defensively for the Dublin attack, particularly the pace of their half back line.

Yet they conceded 1-7 in the first half from 10 in-play chances, and their second-half pressure reduced this tally to 1-5 from eight in-play chances.

In the 2013 All-Ireland final between the counties, Mayo won only two of Cluxton’s 22 kick-outs. But they have had success in pushing up and contesting the Dublin kick-out, in the 2012 semi-final in particular.

Their total of six Dublin kick-outs won last Sunday equalled the highest championship 2015 total against the Leinster champions (equalling the total which Kildare managed in June) although Mayo’s total all came within one 35 minute period.

Against Westmeath and Longford combined, Dublin conceded just one of their own kick-outs, and their opposition’s conservatism certainly wasn’t rewarded defensively either.

Another area Mayo need to address is Dublin’s diagonal ball into their forward line. They amassed 1-5 of their first half total of 1-7 via long diagonal ball into their corner forwards, often bypassing the Mayo sweepers and taking advantage of some aerial mismatches in the Mayo rearguard. The frequency of this was greatly reduced in the second half, although Mayo had by then upped their intensity down the other end and the number of Dublin attacks were reduced.

Dublin have plenty to work on too - they must prioritise improving their defensive discipline, particularly in the scoring areas. Cillian O’Connor scored 1-9 from placed balls during a game in which Dublin made 24 fouls, their highest number so far this summer.

Overall their championship campaign shows an average free concession of just 0-5 per game, 43 per cent of their overall ‘scores against’, so they’ll be hopeful Sunday was an aberration.

So both teams certainly have plenty to work on ahead of Saturday’s big replay - but the way Mayo cope with Cluxton’s kick-out is one facet sure to have a major impact upon Sunday's end result.