Galway will aim for full forward Damien Comer with long, high balls in behind 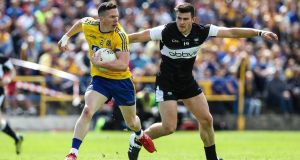 Roscommon go into their biggest game in 15 years with hopes of a breakthrough Connacht title hinging on their full-back line.

On the one hand, they are steady favourites: the kingpins of the province at underage level, coming of age this year in Division One of the league – and with Mayo out of the equation. On the other, they have beaten neither Galway or Mayo in 15 years of championship football.

Nonetheless, in the five senior championship meetings since 2001, the Tribesmen have a 100 per cent record and an average winning margin of 10 points. And they scored 11 goals along the way.

The biggest obstacle, then, between Roscommon converting that underage and league success into championship silverware will be containing that goal threat and keeping things compact at the back.

Roscommon lined out with the same three players in the full-back line during every league game this year. With last year’s captain and regular full back Niall Carty struggling with injury for the early part of 2016, Seán McDermott, Neil Collins and Niall McInerney played all eight games.

Against New York, McInerney started in the half-back line as Seán Mullooly came in to the corner – the trio were reunited against Leitrim – while Mullooly came in for Collins for the Connacht semi-final.

Collins, though, came into that Sligo game in the second period and was a catalyst for a 17-point turnaround. He injected some steel and managed to come to terms with dangerman Pat Hughes. However, the rangy full back, who has three points to his name already this season, tore his hamstring in the build- up to this weekend’s game. Leaving a gaping void in the Rossies’ defence. 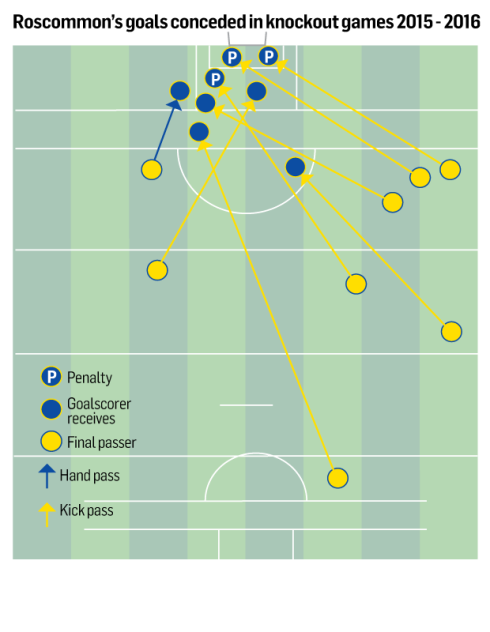 Even with Collins on board, the Roscommon defence has been targeted aerially in big games over recent seasons, with teams looking to isolate height miss-matches and take advantage of the Rossies’ lack of a defensive sweeper to cover such.

Without their best defensive ball winner, that threat is exacerbated.

And in Damien Comer Galway certainly have an attacker who can cause the same sort of havoc as Sligo’s Hughes did in the semi-final.

Of the eight goals Roscommon have conceded in knockout games (league and championship) over the past two seasons, all but one have come via a 30-metre plus kick pass. In the win over Sligo, the first goal conceded came off an attack involving just one handpass and one kickpass. They then won a penalty with two handpasses and one long kickpass from within their own half.

In the league semi-final loss to Kerry, Éamonn Fitzmaurice capitalised on height mismatches inside, exposing the Rossies’ rearguard with two quick-fire goals. Of all those eight goals, three have come from penalties for pulling and dragging around the square.

In contrast, 75 per cent of the passes in the build-up to Roscommon’s four goals against Sligo were handpasses. Maximising their impressive fitness levels - their fluid transitions at times this year have been as impressive as any of the elite counties. And Kevin McStay and Fergal O’Donnell’s side would much prefer to face a team that will take them on in such a running contest.

Galway though will look to stifle such with the same defensive system that worked so well against, an albeit very flat Mayo. They’ll look to take advantage of their physical superiority at midfield against dynamic, but far shorter opponents. Galway won 60 per cent of the kickouts against Mayo's experienced middle eight.

And of course, they’ll look to isolate Roscommon’s full-back line, delivering long and high ball. Most often to Comer.

In the FBD League final between the two counties earlier this year, a Galway team that contained 10 of the same starters who lined out against Mayo, scored two goals to take the silverware. Both goals came off long balls to Comer.

Likewise, the NUIG student scored from a long ball in Galway’s league win over their rivals last year. He has three goals from his last two appearances against Roscommon.

Without Collins, Roscommon will still have Mr Reliable in McDermott, while McInerney, Mullooly, Davy Murray, Carty or John McManus could all feature in the full-back line. They are all quality footballers, but without protection none will be too comfortable if left one-on-one against Comer.

Top scorers in this year’s league, on the flipside Roscommon have also conceded the most of the top four counties in their division in each of the last three years.

So with Galway happy to turn things into a physical tug-of-war of sorts, Roscommon will need to balance their exciting attack-minded running game, with a cautious eye on protecting their back three.

Or else that long wait for a big championship victory will stretch on to 16 years. And league and underage will count for nothing.