GAA Statistics: Goals may come easier to Fermanagh if Quigley is kept quiet 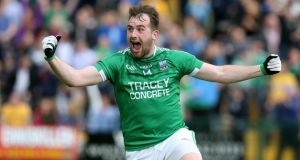 Fermanagh’s Sean Quigley has scored 2-26 so far this summer, 75 per cent of such coming from placed ball. Photograph: Andrew Paton/Inpho.

Fermanagh go into this weekend’s final qualifier round armed with the championship’s top scorer Sean Quigley – but if Westmeath can continue to keep their concession of scoring frees to a minimum they should keep him and the Ernesiders under control.

Quigley has scored 2-26 so far this summer, 75 per cent of such coming from placed balls. In Westmeath’s four championship games to date though they have conceded an average of just 0-4 per game from placed balls, only 0-16 of a hefty 4-62.

On top of that they conceded an average of just 0-3 per game from frees during the league campaign, that was only 19 per cent of their overall “scores against” total of 11-83.

Fermanagh have amassed 2-21 independent of their scores from play so far in championship 2015, with Quigley alone averaging 0-6 per game towards that figure. His overall total equates to 46 per cent of Fermanagh’s scoring aggregate. Pete McGrath’s team have clearly been very reliant on Quigley’s frees.

So the plan is simple, do not give away scoring frees against Fermanagh, or prepare to be punished by Quigley. For Fermanagh the good news is that while handy frees may be few and far between on Saturday, goals probably won’t be. 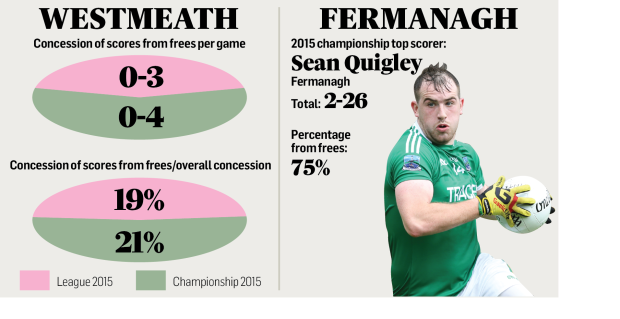 Westmeath’s defence has been an odd entity so far in the championship, while their concession of scoring frees may be low, they have conceded an average of 20 overall fouls per game totting up eight yellow cards and two black cards. Far from steely discipline.

Perhaps their apparent hesitancy to over commit and run the risk of fouling in the scoring zone has some role in the worrying amount of goals they have conceded this year. Or perhaps their defenders have been too far off their men to either stop them up, or foul them.

Four goals conceded in four championship games and 11 in seven league games doesn’t make good reading for Tom Cribbin, no other team in the top two divisions had conceded any more than nine goals during their respective league campaigns.

Against Meath in the Leinster semi-final the Lake county conceded two goals from seven one-on-one situations. While their defenders won only three of the 27 balls kicked into the Meath forwards within the Westmeath 45. Three of those kickpasses were entirely misplaced, trickling out wide or over the sideline, but the rest were won quite comfortably by the Meath forwards.

Against Dublin Cribbin had no choice but to set-up a defensive blanket, and it certainly worked for long periods of the first half, although in doing so their offense was massively sacrificed. Westmeath set-up with Ger Egan and John Gilligan screening their full-back line, with Kieran Martin and Ray Connellan (on rotation) then dropping in behind their half back line and depending on the speed of the Dublin attack their two midfielders were also looking to fill holes.

Still though they conceded four goal chances, and the Dubs converted two of them. Albeit given the opposition it was a notable improvement, but will they opt for such a defensive approach against Fermanagh? With top scorer John Heslin looking to be ruled out too they can hardly afford to set up with just two or three players remaining in their forward line.

Heslin has scored 1-26 already this summer, between the league and championship his total of 1-58 is 36 per cent of Westmeath’s overall total.

They’ll be relieved to know then that Fermanagh have a goal per game ratio of less than one so far in the 2015 season, 11 goals in 12 league and championship games – with two of their three championship goals coming via Quigley penalties. Westmeath though have had only one penalty scored against them all year.

Meath and Dublin had 26 wides between them in the last two games against Westmeath, yet still amassed 5-23 from play alone. So McGrath will be hoping his team can step up and maintain their composure when the openings arrive in general play, as it seems they won’t be able to rely on their usual supply of scores from frees.