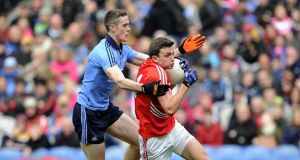 Dublin’s defence has certainly improved this year, but chinks remain in their armour particularly in terms of being caught out on the counter attack.

The outright scoring statistics this year tell us that Dublin have conceded 4-101 during a victorious league campaign, as opposed to last year when they conceded 11-114. That’s a drop in average score conceded per game of 0-16 to 0-12.

Last year Dublin carried that 0-16 average throughout their championship campaign. That despite the fact that 11 points was their smallest winning margin before being humbled by Donegal in the All-Ireland semi-final.

Gavin is asking far more of his team this year though; trying to implement a new defensive approach, without sacrificing their attacking instinct.

Against Cork in the league final, the pinnacle of the league campaign and their last competitive game in Croke Park before this weekend’s Leinster championship opener against Longford, for each instance an opponent had a scoring attempt (or was fouled for a scorable free) Dublin averaged almost eight outfield players in their defensive zone. They conceded only nine scores, six from placed balls.

The highest amount of players within their 45’, and in a defensive motion, was 10, (11 if you include Stephen Cluxton in goal). That happened on just four of the 20 occasions in which Cork had a scoring opportunity though. Of the six occasions when Dublin had more than their six backs and two midfielders within their defensive zone they conceded just once, albeit that was Daniel Goulding’s goal. 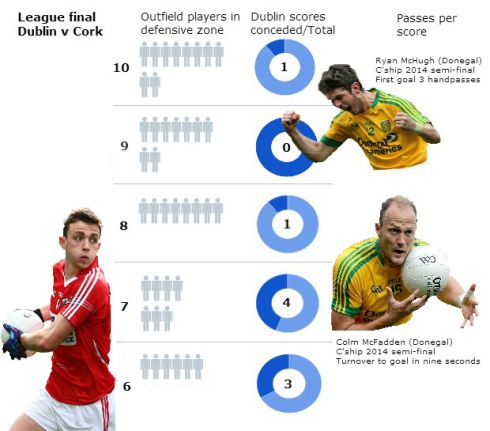 The blip on Jim Gavin’s report card then was that concession of goals, Cork managed to get two which was the same amount Dublin had conceded up to that point in the league. In fact they have averaged a concession of just one goal every two games throughout this year’s 14 O’Byrne Cup and league games. An impressive improvement on 2014, but a concern remains.

The ease in which Mark Collins scored Cork’s first goal would be of most concern, highlighting the same leaks which Donegal exposed to raise three green flags last September.

As Collins’ effort rifled into the Dublin net, the reigning Leinster champions had just six players within their own 45’. Ryan McHugh’s opener in Croke park last summer came as Dublin were caught with just four defenders in their defensive zone. Again they were caught out by a quick attack.

The Dublin defenders remain attack minded, in fact they have scored 0-11 in this year’s league which is 0-2 more than the year before, but it appears their defensive responsibilities have increased too.

Dublin can still be caught out with six defenders on six (or on one occasion against Cork they had just four defenders back, and on another just five) if the ball is delivered quickly. Quick and accurate ball is the key to unlocking most modern day defences, but particularly so against Gavin’s team who it seems are still attacking with little consideration for their shape until the ball is actually lost.

That effort came just nine seconds after Neil Gallagher secured the breaks from his own kickout.

Collins’ effort back in April was of the same ilk, a kickpass and two handpasses saw the Dubs ripped open. The goal materialised from the right half back position, but pending three passes Collins had scored his goal within just 14 seconds.

Remember Derry’s slow tentative build-up play that resulted in just 0-4 in the entire game. Dublin will funnel back if given time, with Ciaran Kilkenny particularly quick to make the hard yards.

On two of the three occasions in the second half against Cork they were afforded plenty of time to bring back 10 men and as a result sniffed out the danger.

Straight after the first goal Cork’s next scoring chance lasted 27 seconds from the time of their turnover, 59 seconds in total as play was stopped for a foul and substitution. Two phases, three kick passes and four hand passes later, and Dublin were back in force.

The other occasion included nine handpasses and lasted over 36 seconds from the time possession was turned over. Same result.

So on Sunday whatever impact Longford’s own defensive set-up will have against the Dublin forward line, upon turnovers the message needs to be an elementary one, get the ball in quickly.

Davy Russell on neck injury: ‘it was a very close one and I dodged a bullet’ 17:00
Aidan Coleman steps in for the ride on returning Epatante 17:00
Spurs chairman Levy warns of ‘irrecoverable loss of income’ if fans don’t return 14:03
Manly Sea Eagles NRL player Keith Titmuss dies after training aged 20 11:30
Arsenal and Leeds condemn online abuse of Pépé and Alioski 11:04
Crossword Get access to over 6,000 interactive crosswords