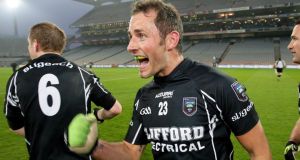 Former Sligo footballer Eamon O’Hara is the latest ex-player to announce the start of his managerial career, he has been confirmed as the new manager of Mayo club Ballaghaderreen.

The 39-year-old who hung up his boots back in May 2013 had been strongly linked to the role in recent weeks with the club officially confirming their “delight” late on Monday night.

The Tourlestrane club man is regarded as one of the greatest ever footballers not to have won an All-Ireland, although he did win a Connacht championship medal in 2007 and an All Star in 2002 during a meritorious 19 year intercounty career.

Nonetheless he will have to manage without two of the club’s most talented products as county minor starlet Cian Hanley has joined older brother Pierce at the Brisbane Lions club in the AFL.

Pierce who is now 26 left for Australia in 2008 and given his remarkable transition to the game in recent seasons a return home certainly doesn’t seem on the cards.

The Roscommon bordering Mayo club is a 45 minute drive from where O’Hara is currently based in Sligo Town and an ideal opening for an ordination into the managerial world.

As a player O’Hara was renowned for his professional approach, his impeccable fitness levels and steely determination, yet above all the eight-time Sligo county champion was a respected leader and captain.

Soon after his retirement the two-time Irish International Rules player began working as a pundit with the RTE Sunday Game panel. After his own county were dramatically defeated by London in the Connacht championship that summer O’Hara vehemently criticised his former manager Kevin Walsh, calling for the now Galway manager’s resignation, controversially claiming that his county were in need of a shake-up from the top down.

O’Hara follows other former players such as Roscommon’s Shane Curran and Westmeath’s John Keane in recently taking over club sides other than their own in their first managerial roles.