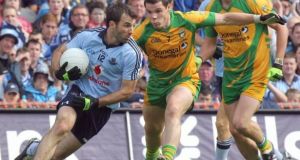 2004 All-Ireland football quarter-final: Fermanagh 0-12 Armagh 0-11 After destroying Donegal in the Ulster final, Joe Kernan’s Armagh, with Kieran McGeeney at the wheel, were seemingly on an unstoppable march to that much needed second All-Ireland to secure a place among the football gods. Fermanagh slammed the gates of Olympus shut. Enda McNulty was sent off before half-time as Fermanagh proved victory over of Cork was no fluke. Tom Brewster famously came off the bench to kick the winning score. Mayo had their number but only after an All-Ireland semi-final replay.

2008 football quarter-final: Wexford 1-14 Armagh 0-12 Granted, the 2002 All-Ireland champions were a fading force but Wexford recovered from a 23-point hammering by Dublin in the Leinster final to beat Down and then Armagh. It was the day Mattie Forde kicked a marvellous 1-5 that included a sideline point. Tyrone, en route to dominating the era, beat them 0-23 to 1-14 in the semi-final. Forde was kept scoreless.

2010 All-Ireland quarter-final: Down 1-16 Kerry 1-10 Proving that some traditions can embolden the next generation, Down came from nowhere to dethrone Kerry in that special summer when Marty Clarke pulled the strings on his brief return from Aussie Rules. The scoreline flatters Kerry as they plundered a late David Moran goal. Mark Poland’s early goal set the tone but it was Clarke’s play-making excellence that lingers and kept Down’s Indian sign over the Kingdom.

2011 All-Ireland minor final: Tipperary 3-9 Dublin 1-14 The Dublin senior’s return to the mountain top was slightly sullied by Dessie Farrell’s highly-rated teenagers squandering a six-point lead. Ciarán Kilkenny, Jack McCaffrey, Cormac Costello and John Small were just four of the minors to graduate to the seniors but it mattered for little as Tipp, managed by 28-year-old David Power, caught fire after the introduction of Philip Quirke and Colman Kennedy, who combined for 1-5.

2014 All-Ireland semi-final: Donegal 3-14 Dublin 0-17 Arguably Jim McGuinness’s greatest moment as a manager. Dublin looked invincible. Unbeaten all year – they have not lost a championship game since – they avoided Donegal’s defensive set-up by shooting 10 brilliant first-half points from long range with Diarmuid Connolly and Paul Flynn magnificent. But Ryan McHugh’s 33rd-minute goal exposed a lack of protection in front of their fullback line. That goal is the only blueprint for stopping Jim Gavin’s men.

1 Gordon D'Arcy: Ireland must conquer fear on a scary Halloween in Paris
2 Cian Healy: ‘Realistically I got away with murder when I was younger’
3 Dave Heffernan delighted to have banished bad memory of his first cap
4 Robbie Henshaw likely to be the only Irish change for France finale
5 Cillian O’Connor rejuvenated and eager to resume Mayo’s quest for glory
Real news has value SUBSCRIBE

Gordon D’Arcy on a Halloween thriller; Will an empty Hill derail the Dubs? 07:51
Gordon D'Arcy: Ireland must conquer fear on a scary Halloween in Paris 07:55
Seán Moran: Will a silent, empty Hill help to loosen Dublin’s grip on Sam? 07:55
Dave Heffernan delighted to have banished bad memory of his first cap 06:00
Cillian O’Connor rejuvenated and eager to resume Mayo’s quest for glory 06:46
Crossword Get access to over 6,000 interactive crosswords