Fitzmaurice gives Kerry veterans until end of month to opt in

O’Mahony, Donaghy and Cooper have yet to declare if they are on board for another year 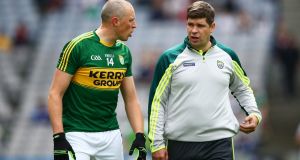 Kerry manager Eamonn Fitzmaurice has given his senior players who have not yet committed to 2017 until the end of January to make up their minds.

Speaking in Tralee, the Kerry boss revealed that while he does not know the intentions of Aidan O’Mahony, Kieran Donaghy or Colm Cooper, he wants to know if they are giving it another go and is prepared to give them a week’s more time before he moves on with or without them.

“Yeah, Aidan is still thinking about his future, Kieran the same, while Colm is focused on the Crokes at the moment. I have nothing firm on any of those at the moment. I haven’t set any deadline as such but I would be expecting to hear from them during the month of January one way or the other because at that stage I think it is time to have made a call and be ready to move forward, whether they are going again or not. But I would be expecting to know during this month either way.”

In relation to McGrath Cup, Fitzmaurice revealed that he has agreed with under-21s manager Jack O’Connor that it would be best if the Kerry under-21s played Tipperary on Sunday in Tralee, just to see how they would fare against senior players.

“First of all, in relation to this Sunday, we are doing something slightly different in that the Kerry under-21s are going to play Tipperary on Sunday, lock and stock, from the point of view that we [Kerry senior squad] are back training tonight and we will have only two sessions under the belt.

While the Kerry boss is willing to give the mark a chance to make an impact, he did not seem excited that it might change the way the game is being played

“I don’t think that the introduction of the mark is going to make a whole pile of difference to be honest. I will be interested to see how it works, but I think so many teams are taking short kick-outs, only kicking the ball 10 or 15 yards, that the mark doesn’t come into play then, but obviously if you can win the ball further out the field you win it and win a free, and it can be advantageous .

“Of course it is something that we will look at because we have midfielders who are good fielders and they are strong in the air. It is something that we should try and use for sure. Like I said, when we are only getting back on the pitch tomorrow night, we haven’t done any specific work on it yet.”

“I would be open-minded to see how it pans out, but I think it’s like everything, I don’t think most teams will use it as a tool; they will chip the ball out short and go from there, because a lot of teams seem to place so much emphasis in getting possession straight away, it’s just the way the game is gone. We will see how it pans out.”

“Look it’s not ideal. You want the lads to stay around. You don’t want your best players being taken. But I think that we have to look at it from our own point of view on how we make it that the lads don’t want to go, that they want to stay around and they want to play for Kerry and that is the number one ambition, simple as that. But look, with the lure of a professional lifestyle it’s hard for young fellows maybe to turn down the chance of going there. But I think that we have to look at ourselves at home first of all and see how we can keep the lads at home.”

Fitzmaurice is excited about having Maurice Fitzgerald on board as a selector for the coming year. “Obviously Diarmuid Murphy is a big loss and he had given great service to Kerry for the last number of years; he was a selector with Jack and then he came on board with me. I suppose first of all what Maurice will bring is his personality, the type of person that he is, to the dressing room. He will be very good with players, very good one on one with players, particularly with the forwards. So I see him having a big role there.

“I think when people see Maurice they think that he is kind of a very easy, happy-go-lucky kind of fellow. Maybe he projects that, but there is serious steel behind that personality as well, so I think he will bring that as well. He will bring a bit of freshness; he is a ferociously honest person.

“I think last year when Liam [Hassett] came in he brought a great freshness to the management and to the whole set-up, and I would be hoping for something similar from Maurice this year. I think he will bring a lot to the table and I am looking forward to working with him.”