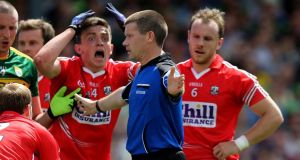 Mark Collins of Cork reacts as referee Pádraig Hughes awards a penalty against him during the Munster SFC Final at Fitzgerald Stadium in Killarney. Photograph: Donall Farmer/Inpho

Call them charmed or call them haunted. Or call it the poise of All-Ireland champions. The sun still shone over Fitzgerald Stadium as this barnstorming Munster final raced through its 72nd minute and Kerry came looking for some sort of score that would preserve a record that is almost as old as Fionn Fitzgerald.

Most eyes in the stadium were on the big-shouldered frame of Kieran Donaghy, taking his usual residency on the edge of the square and offering a big paw to the skies for invitation. James O’Donoghue, who had registered a scintillating point in the first half, was roaming about. Colm Cooper, who has landed a few game-saving points in his day, was in the vicinity too.

But it was Fitzgerald, his Dr Crokes team-mate, who travelled up from corner back to almost casually strike a right-footed point to break Cork hearts. Just a minute earlier, the old place had trembled to the emboldened chant of “Rebels! Rebels!”.

When you come into Kerry and work three goals on Munster final day, you are doing plenty right and in retrieving a four-point half-time deficit against the wind, Cork offered an eloquent retort to the loudening criticism they have faced over their character.

But, aggravatingly for Brian Cuthbert, they missed a golden opportunity to atone for last year’s savaging on Leeside and to go through to the quarter-finals as champions.

As the Cork manager reiterated, they won nothing here. They had Kerry on the ropes. Éamonn Fitzmaurice’s defenders looked deeply uncomfortable as Cork, after an encouraging first half, ran at them with what Cuthbert described as “abandon”, with all three O’Driscolls and Michael Shields making deft incisions before supplying the danger men. Brian Hurley won a lot of ball and O’Connor had an exceptional hour, but Colm O’Neill menaced the Kerry full-back line all day on relatively limited possession.

His one disappointment lay in his failure to nail the 71st minute 45 which would have given Cork a two-point cushion. As Fitzmaurice noted, he rarely misses them. Fatigue rather than pressure was the probable reason and Kerry had the chutzpah to set about rescuing their day and their title.

Cork had played like a bunch with a lot to prove from the get-go, sharp and physical from the first whistle and stunning the local crowd with 1-1 in what was a cagey first 10 minutes, with O’Neill flicking home after O’Connor’s clever approach work along the endline. 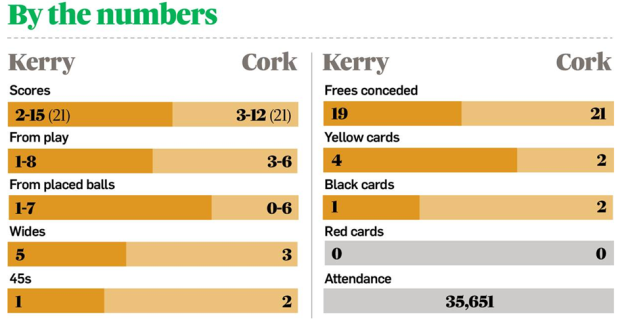 There is always a suspicion that the All-Ireland season only really begins for Kerry on Munster final day and it seemed as if they turned up for a 4pm throw-in here rather than the two o’clock start.

All of the vigour and intent contained within Cork’s opening chapter was undone in the 13th minute when they gifted the All-Ireland champions with the kind of goal that will leave Cuthbert staring at the ceiling in the wee hours.

That score served to shatter the spell of Kerry’s torpor caused by Cork’s early impudence. The teams traded points for the next 10 minutes but gradually Kerry’s overall structure began to influence the flow of the game.

They trusted Shane Enright and Marc Ó Sé to guard Cork’s front two of O’Connor and O’Neill and flooded their 50 with green and gold shirts. Cork couldn’t run through that line and were reluctant to try to pass the ball directly over it. Two exquisite points on the run from Barry John Keane and O’Donoghue pushed Kerry into a 1-9 to 1-4 lead.

Had Cork conformed to stereotype, they would have just faded out of the game in the second half. But they thundered into contention and had outscored the home by 1-06 to 0-2 by the 52nd minute.

A black card for David Moran in the 44th minute was a central cause of Kerry’s woes as the Cork men began to dominate the middle.

The crispness of their attacking play represented the best of Cork, and Kerry required a debatable penalty to navigate a patch back into the match.

The Legion’ man converted the penalty and the game roared with new intent. Colm Cooper – entering the amphitheatre to huge reception in the 43rd minute – clipped the score that gave Kerry their first lead of the half in the 55th minute.

Another beauty by Paul Geaney and a point from Anthony Maher illustrated the potency of Kerry’s heavyweight bench. It looked like normal service had been resumed.

But Cork simply dashed through Kerry’s heart for their third goal, Shields leaving Peter Crowley behind and then playing Barry O’Driscoll, who ghosted past Cooper, to smash a confident goal. They hung on to that precarious one-point lead for almost 10 minutes.

Then Kerry, not for the first time, found a way to outfox them at the finish. They will be back in Killarney on Saturday week.