‘Economic reality’ forces Carlow’s Brendan Murphy to the US

Former International Rules midfielder will be unavailable for the championship 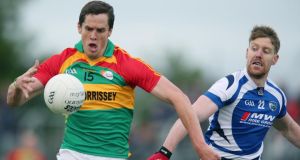 Carlow’s Brendan Murphy will be in the US this summer. Photo: Lorraine O’Sullivan/Inpho

Carlow will have to manage without Brendan Murphy for a second consecutive championship campaign as the big midfielder intends on travelling to the US this summer in search of work.

The former Australian Rules rookie with the Sydney Swans club told his manager Turlough O’Brien last week that due to the “economic reality” of his situation he will be unable to commit for the upcoming Leinster championship.

“He’s a big loss,” says the Carlow manager, “he was between two minds whether to go but he has to earn a few bob too and that’s the economic reality of it.

“He’s given excellent commitment to Carlow this year and he’s trained hard, but he’s a student and it’s an opportunity for him to go out there and work and earn a few bob.”

Last summer as a member of the defence forces Murphy opted out of the Carlow panel because he was on a waiting list for a tour of duty in Lebanon and if selected would probably have departed sometime in May.

Yet having not been called up to the tour Murphy decided against returning to the Carlow fold for the championship.

The team fell to heavy defeats against both Meath and Clare in a disappointing campaign which drew manager Anthony Rainbow’s tenure to a close.

He has since left the defence forces and is studying in Carlow IT for whom he starred during this year’s Sigerson Cup.

“Brendan’s a top class midfielder and we’re not flush with that quality of player here, but we have received a massive reaction here this year and I’m sure someone will fill the gap.”

Meanwhile key forward Paul Broderick looks set to return to full training in the next fortnight. He hasn’t featured since the first round of the league due to bone bruising in his foot which hasn’t healed as quickly as first anticipated.

“Paul is back running, he scored eight points in the league against Antrim and hasn’t played since so he’s very frustrated,” says O’Brien. “He’s done everything asked of him and thankfully he’s near the end of the tunnel with it now.”