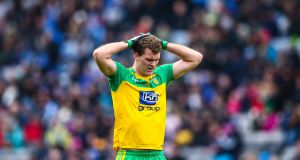 “Two things I won’t miss is chicken and pasta and warm ups,” McGee tweeted. “Thanks for all the tweets and messages feeling the love today. A great journey.”

The 32-year-old, who made his debut in 2004, is not the only member of the 2012 All-Ireland winning side that manager Rory Gallagher expects to lose over the coming months. Neil Gallagher was unable to regain fitness to make the panel this summer while Rory Kavanagh, Christy Toye, Karl Lacey and McGee’s younger brother Neil are all in their 30s.

“It’s not something that has been spoken about but it is inevitable that some of them will call it a day,” said Gallagher. “There is no doubt we have a lot of players with a lot of mileage. One thing that will stand out from that game is the phenomenal athleticism of Dublin.

“They had a number of players not as old as our players. It can determine your tactics as we had a lot of lads playing a long time.

“Donegal as a county have to rebuild now but we have had reasonable success with under-21 and minor teams so we have to keep bringing them through.”

They are the current Ulster minor champions and previously won the title in 2014.

“You never come into a season saying you are going to rebuild, it is a natural progression of players coming in,” said Gallagher. “Look at Dublin there; I don’t think they have a starting under-21 on their team. Mayo had one and they won an All-Ireland with Diarmuid O’Connor.

Tyrone had one with Cathal McShane. It is very difficult for lads at 18, 19 to break into the top five or six teams in the country. We have a number of them in our squad now. We brought through Mark Anthony (McGinley), Eoghan (Bán Gallagher), Marty Reilly has played a lot more regularly.

“I see a great future. There will always be football in Donegal. Look at Ryan (McHugh) and Marty’s age group, they are only 23. Michael (Murphy) and Martin McElhinney are only 27.

“There are seven or eight of our panel well over 30 but a lot of players are coming into their prime.”

There are similar concerns in Tyrone about the future of Seán Cavanagh.

The five time All Star, footballer of the year in 2008 and three time All-Ireland winner, turns 34 in February. Cavanagh has been playing inter-county football since breaking into the senior panel as a teenager in 2002.

“I hope he takes time out to reflect on what’s there for him,” said Mickey Harte after defeat to Mayo on Saturday when he was highly critical of the first of two yellow cards that led to Cavanagh’s dismissal in the 59th minute.

Sean O’Brien 4.0 - Leinster starlet ready for Under-20 debut 04:00
Winds of change as Ireland name a refreshed team, picked on form 01:15
Jacob Stockdale is back on form and ready for the Six Nations 01:15
Klopp defends decision not to field first team for Shrewsbury replay 22:30
Trézéguet’s late winner sends ecstatic Aston Villa to Wembley 22:18
Crossword Get access to over 6,000 interactive crosswords