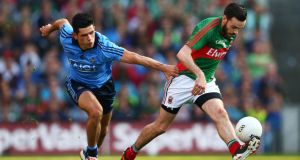 It looked like Cian O’Sullivan’s hamstring snapped underneath the Cusack Stand last Saturday evening. Mayo had been beaten, the clock had turned red and arguably Dublin’s most important player was making the last gallop of the All-Ireland semi-final replay.

The Kilmacud Crokes defender was carried off the field. This is nothing new for O’Sullivan who has been plagued by hamstring problems throughout his career.

“He’s off his feet for the minute,” said Dublin selector Declan D’Arcy at last night’s Dublin press night ahead of Sunday’s week’s meeting with Kerry. “We’d be optimistic. We’ve been through it before with him, he knows that himself, which is a good thing, so we’ll keep our fingers crossed.”

Didn’t look good, Declan, seeing him being helped under the Hogan Stand? “A bit of exhaustion as well. It was a tough game. He was goosed . . . we’re hopeful it will settle down.”

After the long-term loss of Ger Brennan, O’Sullivan dropped back from midfield to sweep up the Mayo debris. His value seems unquantifiable.

“Ah yeah, he’s one of the leaders of the team and he’s a very smart footballer,” D’Arcy added. “He’s a big player for us for sure. But, at the same time, you know, it’s all about the team. If he plays it will be great. If he doesn’t, there will be another players stepping into it.”

It switches focus onto whether John Small can fill that role or maybe Jim Gavin will move Philly McMahon or Johnny Cooper to centre back with Mick Fitzsimons starting at corner back.

Regarding the Diarmuid Connolly saga, which went all the way to the Disputes Resolution Authority before he was cleared to play just hours before the Mayo replay, Gavin was asked if he believes the GAA’s disciplinary system is effective.

“The disciplinary process that the GAA set up is there to ensure its members get due process. That’s the process that we took. I think it’s fit for purpose. We got over that issue and are just looking forward to an All-Ireland final.

“When we approached that week of preparation for the game, as we always do, we looked how we want to play our game. It didn’t matter what players are at our disposal. They have to be adaptable. It’s a 21-man game. Whether a player was available or not was inconsequential.

“Personally, having been by his side, he managed it very well. He’s a very a mature man now. He took a very balanced approach to it. On a personal level I was very happy for him.”

Gavin refused to comment on the reasons why Connolly was cleared to play.

Alan Brogan, also present in Parnell Park, was asked whether Sunday week is to be the last time he wears Dublin blue after an epic career dating back to the 2002 championship.

“I enjoyed it more than I thought I would, to be honest.

“I’ve played for 14 years but it’s not forever. It is coming to an end very, very soon.

“In years to come I don’t think that we will see too many 33 year olds playing. There are a few now. Marc Ó Sé down in Kerry, myself, Stephen Cluxton, Denis Bastick, Aidan O’Mahony and Dick Clerkin. ”

“The first day against Mayo both teams were probably a bit over eager. From our point of view there was a bit of apprehension.

“We hadn’t really played a game of that intensity since we played a Donegal last year so we were a bit nervous of where we were at.

“There was obviously a huge amount at stake and maybe some of them went overboard a little bit. We saw last week when both teams had settled into it that there was a good clean game of football.

Even the black card for Séamus O’Shea was maybe a bit harsh, it probably was by the letter of the law but it looked a bit harsh when I looked back on it.

“The players are aware of the consequences of a black card and David Coldrick is a good referee. He is there on merit, the GAA don’t hand out those positions too easily.

“I think a Dublin-Kerry All-Ireland final has enough in it that it won’t be dominated by a referee or by yellow or black cards.”