Dublin keep it simple as they shake off the rust 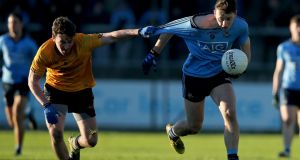 Dublin’s Cormac Costello is held back by DCU’s Conor Moynagh during the O’Byrne Cup game at DCU. Photograph: Donall Farmer/Inpho

January is as January does. Running at about quarter-strength, Dublin were able to put DCU away without a huge amount of fuss, allowing Jim Gavin to bring to 29 the number of players used over the past week. While you wouldn’t say too many made names for themselves, you’d be harsh if you went around pooh-poohing their prospects on the back of it either. It wasn’t that kind of afternoon.

No makes, no breaks. Just winter football on soggy ground with the best option invariably the one that led down the path of least resistance. Those who did best were those who did simple.

Shane Carthy for Dublin was probably the best performer on show, although Cavan defender Conor Moynagh was a clinic in efficient ball-playing for DCU. In the end, Dublin had a wider spread of potential scorers and so they came out ahead. Complicated, this was not.

DCU’s inside duo of Shane Carey from Monaghan and Roscommon’s Enda Smith were able to plunder scores with relative ease at times but as soon as Dublin got them under wraps, DCU had little else to offer. By contrast, Carthy, Dean Rock, Cormac Costello and Paddy Andrews were always menacing for Dublin, with newcomer Con O’Callaghan especially lively at corner forward on occasion.

"I thought it was a very good game,” said Gavin afterwards. “Dublin City University are a very good side, Niall [Moyna] has them, as always, playing great football. It was another lively encounter between both teams. We had some good performances and some good score-taking. We are happy with the performance and the result is just a bonus.

That game will be against Longford in Pearse Park next Sunday, with a possible final the following weekend against either Louth or Meath. It’s only the second time since 2008 that the semi-finals of the O’Byrne Cup have no college representation. Moyna’s side here was certainly a shadow of other DCU teams of the recent past, albeit they were missing the likes of Diarmuid O’Connor, Colm Begley and Stephen O’Brien.

“They’re a big strong physical team and we’re lighter and they just take the wind out of your sails over the course of 60 or 70 minutes,” said Moyna. “I thought our lads worked away well, we’re missing some of our key lads down the middle. We’ve a big, big panel of 45 and I think most of them played this week.

“That wasn’t the Dubs, that was the Dubs lookalike, to be pragmatic about it. They’re going to be very hard to beat. The thing about Dublin now, which they didn’t have for years, is that winning is a habit and I think that once you start winning All-Irelands . . . like the first Sigerson, when you win that first All-Ireland, you realise, it’s not that tough after all.

“It just gives you the confidence but when you haven’t won one, you think it’s Mount Everest and I think that’s the difference, just the mental attitude of players when you’ve won it. You know what it takes. The depth of their squad as well, I think they’re going to be very, very hard to beat.”

DCU hit their straps quickest here, with points from Smith and Carey pushing them into an early 0-3 to 0-1 lead. But once O’Callaghan speared a fine goal on 18 minutes after a thrusting run and pass from Carthy, Dublin went into the lead and were never caught. They led 1-7 to 0-6 at the break, with Costello landing the best point of the afternoon and Carthy adding a smart one of his own.

The second half was drab enough, with Dublin keeping their chasers at arm’s length for the most part. The lead was always three to five points, apart from when Smith ran in a goal for the students five minutes from time. Any notions we had that it might spell a hectic endgame were quickly put to bed, however, through late points from Rock, Costello and Jason Whelan.

A strong second-half performance saw Longford advance to an O’Byrne Cup semi-final meeting thanks to a four-point win over Wicklow and Westmeath’s failure to beat Maynooth University.

It had been a tight first half but Longford made changes at the break and those players made a difference with four of their six substitutes on the scoresheet.

Wicklow enjoyed a lot of possession in the opening half but couldn’t show their dominance on the scoresheet. After going behind early to a Francie McGee point Wicklow replied with 1-1 in the space of a minute to go ahead by three; the goal coming from Paddy Byrne.

McGee got another point for his side and set up James McGivney for Longford’s goal in the 26th minute. Chris Murphy and Ciaran Fitzgerald (free) edged Wicklow back in front but Longford defender Diarmuid Masterson drew his side level just before the break with an excellent point.

Longford dominated after the break with Wicklow just scoring two points in the second half.

O’Carroll and Ger Egan traded points from early frees before Paul Sharry edged the home team in front with a fine point from play. Scores were at a premium at both ends with Maynooth’s Ronan Kennedy the liveliest forward on show, scoring two points from play to add to his earlier free.

On the half-hour mark, a foul on Ruairi McManus gave Kennedy the chance to find the net from the penalty spot, but his twice-taken kick ended up narrowly wide. At the break, the sides were tied at 0-5 each.

A brace of points from Kennedy, the second gifted by Westmeath goalkeeper David Bryan – who, otherwise, played well – nudged the students ahead early in the second half.

A converted ‘45’ by Sharry and a free by Egan tied up the scoring at the end of the third quarter. The teams were level at 0-9 apiece when Eoin McDonagh produced a great save to deny Lorcan Dolan.

Sharry was sent off in the 65th minute after picking up a second yellow card. With normal time almost up, Egan missed a great opportunity from a free to edge Westmeath ahead, allowing O’Carroll to emerge as his side’s hero with a last-gasp point which prevented Westmeath from making the semi-finals.