Dublin hold their heads in frantic finish against Monaghan 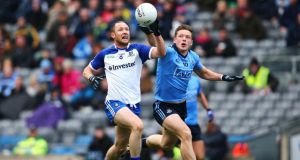 Monaghan’s Vinny Corey gets to the ball ahead of Dublin’s Paul Flynn in the Allianz National Football League semi-final in Croke Park. Photograph: Cathal Noonan/Inpho

Even though we all expected a Monaghan reaction in yesterday’s Allianz Football League semi-final, few anticipated the renewed contest with Dublin to reach near-equilibrium.

That’s what happened though, as Malachy O’Rourke’s team – solar-powered after a mid-week trip to Portugal – put up such a feisty struggle that instead of feeling relieved at their renewed competitiveness they ended up disappointed not to have reached a first final in 29 years.

The final chance to level the match fell to Stephen Gollogly and he sent it wide but with a little less air might dropped for Darren Hughes’s fist to do worse to Dublin than equalise.

They were inspired by Conor McManus’s terrific display as a lone wolf, needing to win his own ball as well as convert it, and he deservedly got the man of the match award after kicking eight points, five from play.

Dublin ultimately did enough by staying in control on the scoreboard – Monaghan led for just 10 minutes of the 70 – and seeing out a frantic endgame in which they watched an apparently decisive three-point padding stripped away to the minimum and just about held out for the win that sends them into the final against Cork on the trail of a third successive title.

They had to play without Bernard Brogan and Rory O’Carroll, two of their most senior performers, who were replaced by Kevin McManamon and David Byrne at corner forward and full back. They also had subdued performances from Paul Flynn and Diarmuid Connolly and were pleased to get home in the end.

A meagre attendance of 20,013 endured a changeable afternoon but the action on the pitch was absorbing. Dublin’s travails with defensive football systems - both cracking and implementing them - have been well documented but this was a good contest.

Dublin had better attacking platforms and opportunities but Monaghan defended well, despite missing Drew Wylie, who picked up an injury on the training holiday, and frequently dispossessed their opponents – one steal by Ryan Wylie from Diarmuid Connolly culminated in another point for McManus.

By contrast, Monaghan were more economical with their opportunities. As manager Malachy O’Rourke pointed out, the service into McManus was a lot better than the previous week in Clones and his shooting was top class. He was also given some practical support with a couple of long-range points from Neil McAdam and Kieran Hughes in the first half and after coming on as a replacement for the second half, Dick Clerkin, who shot three from play.

Clerkin, with Kieran Hughes, also helped the team get some foothold at centrefield, where Denis Bastick, with a number of great catches, and Cian O’Sullivan were on top for the first 35 minutes.

Dublin led by two at the break. A scattering of points from different players plus three dead-ball conversions by Dean Rock and two Philip McMahon points – again demonstrating the dangers of drawing the Dublin corner back too far forward – made up the nine-point total and they were having some success getting the right player on the ball for shooting accuracy.

The Ulster side were resilient, however, and pegged their opponents back whenever a critical gap on the scoreboard threatened. Goalkeeper Rory Beggan kicked a whopping free from beyond 60 metres to narrow the margin to one, 0-7 to 0-8, before Brian Fenton restored the two-point lead at half-time.

Initially it looked like Dublin would kick on in the second half and they reached a three-point advantage after 42 minutes but they conceded the next two scores to McManus.

It was at this stage hard to read Dublin’s intentions. Manager Jim Gavin’s substitutions looked pre-programmed, as he removed O’Sullivan, Bastick and Kevin McManamon, the team’s best forward just after he had scored his second point.

Gavin also appeared content to observe Byrne’s difficulties on McManus as a laboratory experiment, although he acknowledged afterwards that the promising young defender could have done with a bit more screening on the part of his colleagues.

Having run the bench in the second half, Dublin recovered well after falling behind in the 56th minute to rattle off four points without response from two Rock frees and scores by replacement Emmett Ó Conghaile and the irrepressible McCaffrey.

A three-point lead in the 66th minute looked conclusive but Dublin’s urgency waned and Monaghan fought hard to get back with scores from McManus and Clerkin. Late wides by Dermot Malone and Gollogly denied them extra time but they had the consolation of seeing Dublin rather than themselves as the more relieved when referee Rory Hickey blew for full time.