Dublin have the last word over Tyrone 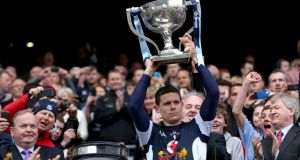 Dublin captain Stephen Cluxton lifts the Division One trophy after the victory over Tyrone at Croke Park. Photograph: Ryan Byrne/Inpho

Dublin 0-18 Tyrone 0-17: Dublin struck late at Croke Park yesterday to win the county’s first Allianz league title since 1993 but Tyrone’s challenge was so persistent that the winners had to wait every minute of those 20 years before the gap was bridged.

In fact for much of the second half, Mickey Harte’s underdogs looked the more likely winners, capable of striking for scores with greater economy than Dublin and not falling behind on the scoreboard in that half until the 69th minute.

They also had to cope with the adversity of seeing captain and all-round lethal weapon Stephen O’Neill replaced before the start after a freakish injury sustained during the warm-up when he accidentally stepped on a football.

Tyrone coped well in his absence with replacement Conor McAliskey scoring three from play, including a wondrous effort while off balance just before half-time, but will ponder what might have been had O’Neill been present. Against that, Dublin pondered much the same question after narrowly losing when the counties met earlier in the league with Bernard Brogan absent.

Yesterday he was back but well marked by Cathal McCarron and ended up being replaced with 12 minutes left having failed to score from play and having hit the post with a straightforward free.

Manager Jim Gavin can feel pleased with his own decisions, as Brogan’s replacement Dean Rock hit two crucial scores in the 67th and 69th minute – one made by his ability to take the hits and curl over a point and the second created by another replacement Kevin McManamon who persevered in heavy traffic to create the opportunity – to turn around a one-point deficit and give Dublin the lead for the first time in 35 minutes.


Killer score
If the nostalgia of Barney’s son playing such a key role in Dublin’s long-awaited success wasn’t enough the killer score, as it turned out, came from other children of the ’70s and ’80s Galloping wing backs James McCarthy and Jack McCaffrey combined a minute later for the latter to flash in a dangerous shot which Niall Morgan could only tip over the bar, giving the winners a vital cushion against Seán Cavanagh’s last point of the match.

Cavanagh might have had a free in the dying seconds but referee Marty Duffy waved play on and almost immediately sounded the final whistle..

It was gratifying for Dublin to win in the midst of attrition. Like Tyrone they had to replace a key forward before the start, as Paul Flynn was not to have recovered from a knock sustained in the semi-final win over Mayo.

They rode out the loss and overcame Tyrone’s layered defending in the second half – as well as a fair degree of aimlessness in some of their own attacks – to strike when the match looked to be inching away from and towards a dispiriting defeat after a campaign that had promised so much for most of the season.

Dublin began in a hurry as has been their habit. By the 11th minute they led 0-4 to 0-1, two of the scores coming in a minute from Diarmuid Connolly and the chance of a goal having been squandered when Cian O’Sullivan fired wide with other options available.

Tyrone slowly hauled themselves back into contention. The line-up had been shuffled by Harte before the start with Joe McMahon going to centrefield (he had to drop to the half backs after Dermot Carlin’s replacement by Aidan Cassidy, who played well in the middle) and his brother Justin taking over at wing forward and Matthew Donnelly dropping to left wing back, allowing Seán Cavanagh into his most dangerous position, on the half-forward line where he put Ger Brennan under a lot of pressure.

Close touch
A pattern emerged of greater scoring efficiency from the Ulster side. They closed a three-point gap in three minutes and stayed in close touch on the scoreboard from then on.

Morgan, who was awarded the TG4 Man of the Match award, expanded his portfolio, which included five points from long-range dead balls, with a good save from Jason Whelan, Flynn’s replacement, in the 29th minute after Michael Darragh Macauley had threaded a great ball into the forwards.

The rebound ran however for Paul Mannion, who added to his fine rookie league achievements with three points from play plus a free, to steer the ball over the bar.

Tyrone took the initiative after the break and led six times. Dublin responded immediately on three occasions but it began to take longer for them to find the equaliser, taking eight minutes before Philip McMahon levelled after Mark Donnelly’s score and five minutes until Cluxton equalised a free from his self-proclaimed apprentice, Morgan.

In the end Dublin summoned the wherewithal to find the vital scores – whereas Tyrone couldn’t – and having led for all of two minutes in the second half, the job was done.