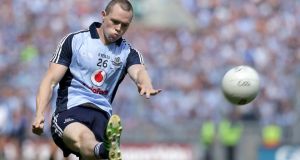 Dublin’s Dean Rock: has played a total of 70 minutes across Dublin’s five games, chipping in with 10 points – all but two from play. Photograph: Inpho

They are the second wave of the tsunami, the aftershock that comes to rattle you just when you’ve seen the first one off. Wherever Mayo stand with 20 minutes to go on Sunday, their job will only be half-finished as long as Jim Gavin still has cards to play off the bench.

The few times Dublin have been in bother over the course of the summer, Gavin has turned to his substitutes to find a way out. So far, they’ve yet to fail him.

The headline numbers only tell some of the story. Dublin have scored 3-15 off the bench in their five games so far this summer. While this adds up to the same total as Mayo’s 4-12, you couldn’t argue that it amounts to the same thing.

Of that 4-12 for Mayo, 4-3 goes against the names of Cillian O’Connor (3-3 against London) and Andy Moran (that goal against Galway). They were both coming back from injury, substitutes in name only. Both are likely to start on Sunday.

Limited involvement
Dublin’s bench is a different story. Unless Gavin has a change of heart this week, none of Dean Rock, Eoghan O’Gara or Kevin McManamon will start the final. Yet between the three of them they’ve contributed 3-13 from limited involvement. Rock has played a total of 70 minutes across Dublin’s five games, chipping in with 10 points – all but two from play.

It isn’t just in attack where they boast a well-stocked fridge either. In Philly McMahon and Denis Bastick, Gavin has had success when he’s needed a problem solved further back the field. Bastick came on after 46 minutes in the Leinster final and shored up midfield where Meath had been making hay – in the 24 minutes after his arrival, Meath only scored two points.

Likewise when Cork were causing trouble in the Dublin full-back line in the All-Ireland quarter-final. McMahon came on for Jonny Cooper on 51 minutes and from there to the end of the game, Cork only managed another two points.

And while McMahon’s introduction in place of Kevin O’Brien after 17 minutes against Kerry didn’t exactly staunch the flow of scores, the half-time reshuffle that saw Bastick come on at midfield and Cian O’Sullivan drop back to number six had the desired effect. Kerry only scored six points in the second half.

‘Different elements’
“When you have the likes of Dean Rock who is so accurate, Eoghan O’Gara, Kevin McManamon, all those type of players bring different elements to the game,” says Bastick. “As a defender, you’re probably looking in and after dealing with Bernard Brogan for maybe 65 minutes of the game and Kevin comes on and starts running at you, it’s extremely difficult. You have to change your way of playing.

“It’s the strength in depth and it’s the pushing each other that we do in training. Fellas are obviously disappointed, both at not making the bench and not making the starting team. So they have a lot to prove when they get on the pitch. Like all the fellas on the panel, when you’re watching it’s not easy. Everyone feels they can contribute and do something themselves. It’s hard to watch when you’ve no control on what’s going on out there.”

For Bryan Cullen, being a bit-part player just two years after lifting Sam Maguire and still the right side of 30 can’t be easy. But part of Gavin’s success has been the apparent willingness of everyone involved to be the jigsaw piece he needs rather than the one they’d like themselves.

“We’d all love to play every game,” says Cullen. “That’s the reality of it. But at the end of the day Jim can only pick 15 guys and then five guys to come in. All I can do is put my best foot forward and try hard in training and I feel I’ve been going reasonably well. That’s all I can do from my perspective.

It’s got them this far. Whether it will get them over the line come Sunday is the great imponderable.