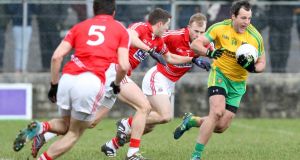 Donegal’s Michael Murphy of Donegal gets away from Tomás Clancy and Michael Shields of Cork during their national league game at Ballyshannon. Photograph: Andrew Paton/Presseye/Inpho

Stormy weather along the wild Atlantic way as Cork made their way home from a first Allianz League defeat yesterday evening. Brian Cuthbert and company are putting up more miles than Jack Kerouac and he grinned ruefully as he acknowledged that the road trips aren’t over yet. “I saw the sign for Derry near here. Another 150 kilometres.”

Cork looked as if they were going to be stuck on 0-5 here for a while in the second half but what had been a very cagey match changed completely after Michael Murphy was shown a second yellow in the 51st minute.

The Glenswilly man had twice demonstrated the perfect use of wind energy by landing two extraordinary frees, one from all of 55 metres, but in open play he was becoming increasingly frustrated as he jousted with Michael Shields and Eoin Cadogan.

After watching Murphy plunder a high ball from the sky in the seventh minute, which caused pandemonium in the Cork back division, the visitors paid close attention to the Donegal captain. He was booked for a robust challenge on Cadogan in the 32nd minute, a foul which screamed out frustration at the physical means by which he was being shadowed.

It is the second time Murphy has left the field early in this league and if teams think they can work him into a lather of frustration, the man-handling is bound to continue. “He works hard and he is a big man and when he goes into contact, it can look worse than it is,” said Donegal manager Rory Gallagher of the challenges which got Murphy in bother.

“He is a big unit and I know many referees feel that he can look after himself. We will have to watch the video back. I thought Joe McQuillan handled the game well.”

Donegal were leading by 0-10 to 0-5 when their captain departed. Cork, mirroring Donegal’s defensive set up in the first half, looked to be out of ideas but got a break when Mark Collins’ hopeful shot from distance held up on the breeze and swung to the right of Paul Durcan’s goal. Brian Hurley grabbed possession and spied Tomás Clancy racing towards the small square: he palmed Hurley’s pass into an empty net.

Hurley then added a valuable point from play and suddenly the Donegal men were scrambling to salvage a situation which they had controlled.

Neil Gallagher had another immense day in a Donegal shirt, operating as playmaker around the middle, dominating the air and cleaning up ball after with those great mitts of his.

His performance was matched by Frank McGlynn in the Donegal half back line and Mark McHugh looked like himself again, as busy and purposeful as he was in his breakthrough year.

The game opened up after Murphy left the play, with Cork emboldened by their reprieve and Donegal counter-attacking at pace. Martin O’Reilly, who struck a very tidy 0-4 on a day when scores were hard to come by, had a wonderful goal chance in the 47th minute, a period when the home team were rampant.

Neither Colm McFadden nor Ryan McHugh will want to see the 60th minute chance when they over elaborated the final pass on an excellent breakaway attack; the pair of them were bamboozled by the number of options at their disposal. That miss – as well as five other wides – would have left Donegal sickened had they failed to close this out.

Cork kept sniping, with Collins and Cadogan driving the visitors into scoring range. But the conditions were laughably difficult and Neil McGee kept Cork’s danger man, Colm O’Neill, at close quarters all afternoon.

Overall, there was a sense that they were trying things out on this road trip. Their defensive set-up, mirroring Donegal’s, was solid in the first half but they were surprisingly conservative in their shot selection and slow to counter attack: they hurt Donegal on both occasions that they moved the ball swiftly.

Level at 0-5 apiece at half time, Cork seemed likely to struggle facing into the gale. Murphy’s huge points – and a similarly thunderous effort from Odhrán MacNiallais – gave Donegal complete control of the day. If Murphy’s dismissal placed Donegal under unexpected pressure, then Cork responded smartly to the goal from nothing and had a half-chance to manufacture an equaliser but Donal Óg Hodnett’s shot carried on the breeze.

“It is a lottery, yeah,” agreed Cuthbert of trying to play football in such raw weather conditions. “When you have frees going over from the 65 metre line . . . and then Mark’s shot swings in and we get a goal. But it is far from conditions like this that we will be playing in. Every time you play Donegal is a good day because you learn how to play against their system. I thought we did quite well. We were a little ponderous at times in the first half, we got caught out. But it is only March.”