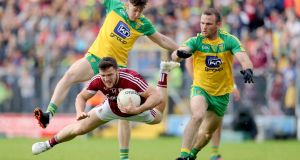 A summer’s evening can change everything. The Galway tribes came into Markievicz Park – Sligo’s own lyric little bandbox – on a balmy Saturday night tentative and unsure about where their football team was going.

They left like a crowd reborn. Donegal traipsed out to the minor consolation that at least the journey back to the hills was relatively short. Late in this hugely one-sided game, the announcer declared that a Donegal season ticket had been found and could be reclaimed at the press box. Somehow, the Donegal crowd saw the funny side.

This was a different Galway from the Connacht final. A purposeful fury informed their play and the returned man of maroon football was the conduit.

From the beginning, Seán Armstrong advertised his return with an attitude that was sharp and imaginative. He seemed to electrify the entire Galway forward line and deepen their belief. He made and nonchalantly struck over his first free and before 10 minutes had passed, he had added two terrific points from play and then made the searing burst along the right touchline to link with Ian Burke, who gave a livewire turn on his debut, for Galway’s first goal, palmed home by the rampaging Johnny Heaney.

That left the score at 1-5 to 0-4 after 18 minutes and the packed house, filled mainly with the yellow and green of Donegal, might have been forgiven for settling in for a taut, absorbing high summer contest. After all, Donegal had rattled off the previous three points, working the ball through Michael Murphy, operating as a kind of midfield playmaker and constantly looking to source balls for Paddy McBrearty to have a crack. It worked but even in the first quarter of the game, it looked predictable. And the closeness of the score was deceptive.

Even in the warm-up, the physical difference between the teams was striking. Galway were without Fiontan Ó Curraoin but still towered over and outmuscled the slender Donegal men; without the central strength of Murphy and Neil McGee, Donegal would have been blown away sooner.

As it was, Galway were winning one-on-one battles all over the field. Caolan Ward couldn’t handle the bullish strength and directness of Damien Comer and was forced to concede a free which Armstrong converted. And with that, something seemed to click for the maroon team. They had nothing to fear.

Donegal were already under heavy pressure on their restarts and even though they brought 14 men into their own half, the cover was flimsy. Galway just tore through them. A casual point effort by Shane Walsh clipped off the post in the 25th minute and when Murphy, trying to be everywhere all at once, slipped on collecting it, goalkeeper Mark Anthony McGinley was forced to drag down Thomas Flynn, who was first to the ball.

Referee Anthony Nolan had no choice but to issue black and with that, Donegal lost their best performer of the championship. Liam Silke’s conversion was ice cool and with that, Galway were on their way while Donegal slipped into a black hole.

Heaney added another identical goal just before half-time and replacement goalkeeper Peter Boyle denied Michael Daly a fourth. In the space of 15 minutes, Donegal found themselves trailing by 3-09 to 0-6 and suddenly looked terribly young and very lost. There was a full half of football left to play.

“It’s something that worked out for us. It’s more about what we do ourselves in our own game,” said Kevin Walsh when asked if he sensed Donegal were vulnerable.

“It was more about getting hands on the ball around the middle area: we’ve been quite good coming off the shoulder all year but we didn’t get enough ball last time so we weren’t able to show that.”

At half-time, the talk among the crowd of 10,564 was of how much worse the evening could get for Donegal. A fair bit, was the answer. In the 44th minute, Michael Murphy was black carded. Two minutes later, his All-Ireland-winning team-mate Martin McElhinney was subject to same verdict by referee Anthony Nolan, who was fast becoming the subject to the wrath of the home crowd. Rory Gallagher had already used all his substitutes: Donegal were down to 13 men.

A strange thing happened after that. The younger Donegal players actually began to play and express themselves. Michael Langan fired a good point and then Patrick McBrearty, showing real fire, let go with a thunderous effort which smacked off the crossbar. It was a good enough strike to have Kerry great Mikey Sheehy shifting in his seat. But it wasn’t to be. In the 59th minute, McBrearty saw his penalty and follow-up saved by Bernard Power, restored to starting goalkeeper by Kevin Walsh just before throw in.

Still, Donegal struck another 0-2 and the weird thing was that had McBrearty’s two goal strikes landed, it would have been a four-point game. But in reality, Donegal were in a tailspin.

“Hand on heart I would have expected tough days,” said Donegal manager Rory Gallagher in a frank assessment afterwards.

“We have a lack of experience. Take Paddy McGrath and Neil McGee out of our defence and they are the only two that played in 2014. All those lads are in their first or second year of inter-county football. We know they are exceptionally inexperienced. It’s a tough day. We have good young players but it was going to be a challenge.”

It was clear that Galway had no interest in stitching it into Donegal but they also played some aimless football in the second half. A colder team would have kept pouring it on. As it was, Walsh sent Michael Meehan in to a huge roar of acclaim late on. The western crowd prayed for another score but had to be content with a late goal from Danny Cummins. That score completed a restorative evening for Connacht football: Mayo and Galway in the All-Ireland quarter finals.

For Donegal, it was a sign of the times. The great Karl Lacey sat hunched on the field when it was over. It was hard to believe he was part of a team that dismantled Dublin three summers ago. That was then, this is now.