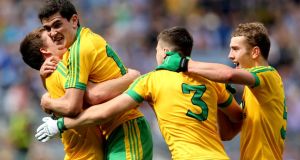 Donegal had never won a minor semi-final before let alone a title outright and found themselves in a tricky position with 10 minutes remaining.

They were two points down and kicking into the intimidating Hill 16 end of the ground which was a mass of blue bodies in the run up to the senior game. But three points without reply, including the 59th minute winner from substitute O’Donnell, secured a final place alongside Kerry back at Croke Park on September 21st.

The victory continues a remarkable winning streak for this group of players stretching back to the under-16 grade.

“Ethan has been outstanding for us whenever he’s come off the bench, you need that type of quality to turn games,” said Bonner. “I’m absolutely delighted for the lads because I think back on my playing days, I lost an All-Ireland semi-final here in 1990 against Meath and there’s nothing worse than losing a semi-final.

“We’ll be back now in three weeks’ time and we know Kerry are red-hot favourites but we’ll definitely be coming to win an All-Ireland minor final.”

Donegal pulled off a similar come-from-behind result against Dublin in a challenge game just weeks ago in Cavan, earning a draw on that occasion.

The fear was that Donegal may be intimidated by the Croke Park atmosphere this time having not competed in a semi-final since 2006. They did look nervy in front of the posts early on.

Dublin moved 0-5 to 0-1 clear after 22 minutes and Donegal blasted half a dozen wides in that time before eventually finding their range.

But when the Ulster side got going it was spectacular stuff with full-forward John Campbell inspiring a scoring siege.

He contributed 1-2 to a 1-5 haul that Donegal tallied in the last seven minutes of the first-half to turn the scoreboard on its head.

His 23rd minute goal was a beauty, redirecting Tony McCleneghan’s chipped pass into the danger area with a clever fisted finish to the corner of Dublin’s net.

From a perilous position, Donegal were now in the driving seat and took a deserved 1-6 to 0-6 half-time lead.

They were without danger man Eoghan Gallagher due to a hamstring injury suffered early last week.

Even without him, they oozed quality when they linked up in attack and picked off scores through the likes of Stephen McBrearty, younger brother of senior star Paddy, and Cian Mulligan.

A 47th minute Jack Burke goal for Dublin turned the game for a second time, moving Cyril Kevlihan’s side two clear late on before that strong Donegal finish.