Despite injuries Ciaran McGrath not in any rush to quit 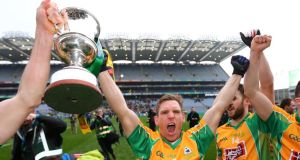 Having spent two years working his way back from a broken leg, not even a cruciate ligament tear could stop Corofin defender Ciaran McGrath from finishing this year’s All-Ireland club final.

Now he has his heart, and mind set on featuring for Galway this summer. His aim is to be back on the field by June, just four months after tearing his cruciate ligament 15 minutes into the club final on St Patrick’s Day.

“When I turned I knew I was unstable, and there was a sharp, pinching pain” explains the 30-year-old Galway corner back, “but the adrenalin is pumping and it’s something you know is there but you haven’t got too much time to think about it either when you’re in a two man full back line in Croke Park.

“I knew something was wrong but as the game went on I just needed to finish it out because I have missed two years of football with a broken leg - so I was not prepared to come off after ten minutes, not after working so hard to get out there, it wasn’t an option.”

McGrath says he felt his knee pop in and out “like a slingshot” while anticipating a breaking ball.

“Unless I became a liability, and it never came to that, I was going to have to be dragged off or hauled off. I didn’t want to bring any attention to it, so I didn’t ice it at half time or anything as lads would start asking what’s wrong.”

Still feeling pain after the game, celebrations interfered with an immediate diagnosis, although after his knee “buckled” during a team photo he knew there was a serious problem.

A later scan revealed then that the defender, who had been a regular for his county before breaking his leg in 2012, had torn his cruciate ligament and damaged cartilage.

“At this stage the lads are just laughing, they seen what I went through to get back after the leg break. Trying to run with a limp and you could see lads saying in their own minds that this lad should just give it up, it didn’t look like I would get back then either.

“I have the same consultant as with the leg break, and I’m booked in for an operation in June. We’re going to rehab it until then but because I have so much single leg work done with the broken leg and I have built up a lot of muscle around it we’ll just see what happens.

“I’m hoping to be back playing by June and the consultant is confident that with the work done previously that fingers crossed I’ll make the comeback.”

McGrath is currently in the Galway panel and if they can defeat New York and Leitrim they’ll face Mayo in a Connacht semi-final on June 14th.

“If it’s possible to avoid the operation I definitely will as I’ll put the work in, I’ve already put in 18 months on my own and I got back when others thought I wouldn’t. But if I’m back and it’s not right I’ll have to bite the bullet and the operation is there for me.

“Kevin Walsh has me in the Galway panel and I’m working with the physios and I suppose if there’s any chance he’ll give me every chance.

“I’d be back with a round or two of club game s to go before Mayo , and I’ll probably have a challenge match or something so it’ll be hit or miss then.”

Driving McGrath has not been “self-motivation” but rather a fear of Corofin winning without him.

“It’s a lot easier when you know there’s a good chance of success when you’re back. But I always believe that if you work hard at something you’ll get your rewards, if you love something you should put everything into it, and I love football. I love playing football with my county and especially with my club , so the goal will be to give it a right good go.

“It’ll be a while before I’m ready to hang up the boots.”