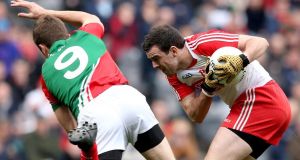 A strange one here. Still, Derry make the leap from rebuilding Division Two county to league finalists in under 12 months.

Mark Lynch’s creativity, and his haul of 0-9, told in the end but it was the collective attitude to Fergal Doherty’s 25th minute dismissal that tells us all we need to know about Derry for now.

Mayo also reminded all of their usual failings.

Not that these were evident early on. They dashed into an early lead only to be reeled in by Cailean O’Boyle’s scrappy goal. Andy Moran’s neat finish got them back in front from a move created by Aidan O’Shea deep in his own half when the All Star midfielder was unceremoniously emptied by four-time nominated All Star midfielder Fergal Doherty.

Play swooshed down field and Moran goaled to give Mayo a 1-5 to 1-4 lead but Armagh referee Pádraig Hughes knew his business. He had already booked Doherty for pounding into Jason Gibbons in mid-air – where Mayo had been lording it.

The sending off seemed correct and proper. Not that Doherty will feel he had an option.

O’Shea had just made a textbook block on Benny Heron and the ball spilled up the sideline. Both men, each the living embodiment of muscle within their county, quickly realised a collision was unavoidable.

O’Shea was going to be first to the ball and only had to pull on it. Doherty, on seeing his younger rival, would have been compelled by every ounce of his footballing instincts to land a shoulder O’Shea would remember Monday morning.

That it connected with O’Shea’s mid-section, laying him out in the process, meant the dye was cast.

The ball found Kevin McLoughlin who fed Mickey Sweeney who pushed it on to Moran from point blank range.

Doherty walked for a second yellow card, O’Shea recovered but Derry refused to wilt. They went in a point to the good, 1-8 to 1-7, thanks to some glorious shooting by Lynch. Two gems in particular from play.

Not a bad opening stanza in front of this sparse Croke Park crowd as the expected Dublin and Cork supporters were waylaid in surrounding pubs as Liverpool streaked into the lead at Anfield.

On the resumption of play, Mayo regained their initial grip of midfield, which yielded immediate scores for Alan Freeman and Jason Doherty.

But with Lynch in this mood, demanding the ball, Derry always had a chance.

O’Boyle levelled it, 1-9 apiece. Doherty nudged Mayo ahead once more.

That was the pattern of this game. Mayo’s to lose throughout. And they did.

No black cards. Plenty of candidates but none that Hughes felt warranted the new punishment. Not even when Patsy Bradley hauled Lee Keegan to the ground en route to goal.

Of course players evolve. It appears that a three to five second period of negotiation exists whereby a player can make his case to the referee. A new way to turn it back on the official. Don’t ruin the game, ref.

Ignoring the neatly compiled statistics, it seems like only a matter of time before the black card ruins a major collision, thereby leaving Gaelic football wide open to further ridicule.

Entering the final quarter two miscues by Lynch seemed costly as points by Doherty, Freeman and Gibbons put some daylight between the sides.

Next, Donal Vaughan burst through from the right wing but Mallon denied a certain goal with a fine save.

Derry broke the rhythm yet again with some individual excellence from Seán Leo McGoldrick. Twisting and turning away from three Mayo defenders, including Keith Higgins, McGoldrick suddenly found himself bearing down on goal. He smartly fed fellow wing back Kevin Johnston who punched to the net.

Mayo had more ammunition with Freeman and substitute Damien Varley reasserting their supremacy.

The crowd barely swelled as noise filtered through (from iPads) that something gripping and historic was unfolding at Anfield. Competing with the Premier League seemed unnecessary.

More pretty combinations from Mayo but Mallon was having a storming day. On 63 minutes he denied Keegan’s rasping shot with his head. Freeman nailed the resulting 45 and Mayo stumbled towards the league decider.

But they couldn’t kill it off and no longer deserved another Croke Park outing before championship.

Emmett Bradley arrived and tied it up. Derry were having plenty of joy down Mayo’s left wing. Enda Lynn gave them the most slender of leads.

More heroics from Mallon. Get the ball to Lynch. They did. Wide on the right, he side-footed it over. Then he, majestically, brought his tally to 0-9 in injury time.

It ended with a Mayo free. Three-point game. September all over again. At least Moran went for goal but it flew over the bar.

Derry’s day. Mayo only have themselves to blame. Hardly a new script for them in Croke Park.