Decision to step down in interests of Dublin, says Gavin 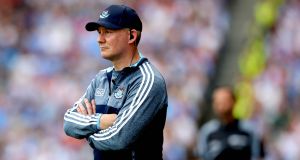 Jim Gavin: “The conclusion I came to is what’s best for Dublin GAA, and more importantly what’s best for the players, is to hand it over and create that environment for them to grow once more.” Photograph: Ryan Byrne/Inpho

For all the extended talk of why or when exactly Jim Gavin decided to step down as Dublin football manager, there is one detail he now made perfectly clear.

After 12 continuous seasons on the sideline, the last seven as senior manager and the five before that with the Dublin under-21s, a role in football coaching going back to 2003, it wasn’t so much that he’d nothing left to give as it was about giving someone else the chance.

After that the why or when exactly took care of itself.

“Every year I’ve been involved, where it was playing for 10 years, coaching going back to 2003, managing the last 12, every year I have given it my all,” said Gavin, in gently reflective mood after collecting the Signify Sports Manager of the Year award for 2019, neatly bookending his term given he won the same award after his first All-Ireland with Dublin in 2013.

“I volunteer my time, the players volunteer their time, and we all have a decision to make, and I made the decision which I believe is in the best interest of Dublin GAA.”

Speaking at some length for first time since announcing his decision last Saturday morning, Gavin also made it clear the winning of the first five-in-a-row in All-Ireland history had little bearing on that decision.

Nothing about Gavin’s work commitments have changed going into 2020 – he continues to be the assistant director in the aviation authority – and at age 48, there is no change either in his commitment to Dublin football: it will just be taken down a few notches for the time being.

“Yeah absolutely, I’ve always been coaching hurling and football, and with my son’s team at Round Towers now, so I’m looking forward to doing that. I’m still heavily involved in the game. I’ll be coaching U-11 tomorrow night and that’s where I see my new journey.”

It may not quite be a clean break, as some plans were already in place for 2020: “You have a responsibility, even during the year to be making plans for the following year, in terms of various aspects of the logistics of the administration and on players that you are looking at. You are always planning.”

Gavin certainly wasn’t about to speculate on the next man in: Dessie Farrell, who succeeded Gavin as Dublin under-21 manager, or indeed Pat Gilroy, who preceded him with the senior team.

“Dublin GAA, the county committee, have a process set up and it would be inappropriate for me to comment on that at this time. Because I know whoever they elect will be an outstanding candidate. There’s a unique and special group of players there and they do their best every time they take to the field representing Dublin, I don’t see that changing in the future.”

Does Gavin ever see himself managing a county outside of Dublin?

“I’m just reflecting on the moment and I don’t see that happening.”

The suggestion that other counties may draw some hope with the end of Gavin’s reign is similarly discarded: “I can’t speak about other counties. We’ve always focused in on trying to be our best, that’s all we could ever do. We took a very players-centric approach and I’m sure it will be the same with the next coach.”

The proximity to the 2020 season may have added some element of surprise to his decision, and created some uncertainty about the future of certain players, namely Dublin captain and goalkeeper Stephen Cluxton. Gavin threw that question back to the Dublin supporters.

“We had received phenomenal support from the Dublin fans, throughout the league campaign, and indeed in the second half of the replay when the game was nip and tuck, when the Dublin supporters kept motivating the team and never gave up, and completely believed in us and that’s a great trait to have from a supporters perspective.”

The standout memory, he insisted, is not one but cumulative.

“It was fantastic from the first day I took over, from the first day of coaching back in 2003. to the first day as a manager in the 2008 season with the under-21s, to the last day. It’s a unique and special volunteer-based and community-based organisation, and I’m very proud to be a member of it, and I look forward now to going back and to continue on training under-11 hurlers.”

His record, six All-Irelands in seven years, creates inevitable expectation on whoever does follow in his footsteps, only Gavin doesn’t necessarily see it that way.

“When I was involved we just looked at the next day ahead of us and the next campaign ahead of us, so I haven’t really reflected on it. I was asked the question there, and I said that I gave it my all, and that’s all I can do. I just look forward now to watching the team grow and yeah, that’s about it.”