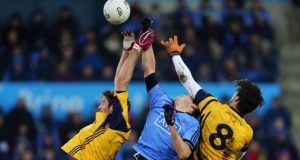 The deftest pickpockets of them all had their own pockets picked. Splendidly. On a murky, old January day in Parnell Park, the Dublin City University students ventured the short journey down Collins Avenue, fed on scraps for much of this O’Byrne Cup group finale with All-Ireland kingpins Dublin and, somehow, escaped with their bellies full having ultimately feasted at the top table.

Trailing by six points with just 11 minutes of regulation time left, DCU took advantage of indiscipline in the Dublin ranks – a black card, somewhat harshly, issued to full-back Rory O’Carroll and then a straight red card to another All-Star in Paul Flynn – to assume the late momentum and drive home their advantage to earn a semi-final encounter with Meath.

Ironically, the killer blows were struck by two DCU students who entertain their own notions of wearing the blue county colours.

Michéal McCarthy, only on the pitch a matter of minutes as a substitute, superbly fired home the college’s third goal in the 63rd minute to get them within a point of Dublin and, although Danny Watson seemed to calm matters with a point to increase the lead to two, it was all DCU thereafter as Flynn’s dismissal was followed by three unanswered, match-winning points.

Sour taste
Gary Kelly slotted over the equaliser, a free, two minutes into injury time before Davy Byrne, a stalwart with Ballymun Kickhams, kicked a point from 30 metres out near the sideline to seal the deal.

If the rare taste of defeat left any sour taste, Dublin manager Jim Gavin wasn’t showing any of it in the aftermath.

“It is always disappointing to lose a game, but in terms of a workout it was excellent. Both teams will have learned a lot from it. DCU are a very well-conditioned team, very well coached. They justified the win in the end,” said Gavin.

In truth, he, like most of those present on a miserable afternoon, must have wondered how the end result had come about. Although DCU’s big full-forward Conor McGraynor fired home a fine goal in the seventh minute that kept his side in front for most of the first half, Dublin finished that half strongly – with Cormac Costello, his wounded collar-bone now fully mended especially impressive – with three unanswered points to level at the break, 1-3 to 0-6.

And, although playing into a stiff wind that more often than not included heavy rain, Dublin dominated and found avenues of space through the DCU centre. Four points in succession - kick-started by Jason Whelan and followed by efforts from Kevin McManamon, Paul Hudson and Costello – stretched Dublin into a four-point lead without four minutes.

Then, a hint that it wouldn’t be all plain sailing. In the 43rd minute, Byrne – who moved from centre-half back up to wing-forward – floated in a high ball which deceived Dublin ’keeper Sean Currie and finished up in the net.

Dublin’s response was what you’d expect. Eoin Fanning kicked a point that was followed by a further four with Shane Carthy, Paul Hudson (two) and Costello all getting in on the act to give the All-Ireland champions a six-point cushion. A switch was flicked off. Dublin lost their way. And DCU punished them with a barnstorming late, late show that finished with Byrne – a mature student – punching the air after his late kick turned a potential draw into victory.

“I’d say, they took their foot off the pedal,” said DCU coach Mick Bohan. “They kept going at it and the (second) goal gave us a bit of a lifeline and the game turned on its head.”