Cork condemn Down to Division Two 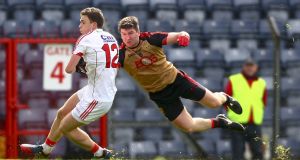 Cork condemned Down to an immediate return to Division Two next season following a drab tie in demanding conditions at Pairc Ui Rinn on Sunday.

The decisive spell came in a 20-minute period either side of the interval, when Cork kicked eight points without response to surge five clear.

Down, who’ve lost all five top flight games, showed plenty of fight but a glaring lack of scoring power militated against their best efforts. Yet it took a fine save from Cork goalkeeper Ryan Price to turn a Donal O’Hare shot around the post in the 54th minute to prevent the visitors mounting a comeback.

Cork were able to see out the game and claim their third win of the campaign with a couple of Mark Collins points to add to Colm O’Neill’s fourth from a placed ball in the closing stages.

Despite playing against the howling wind from the start Cork still managed to be in front at the break, 0-4 to 0-3.

Even with wind advantage Down set-up their stall from the start by withdrawing as many as a dozen players behind the ball.

Little wonder then that they failed to score from play in the half and in all it took 34 minutes for the first and only point from play, courtesy of Collins to level matters at 0-3 apiece.

The Cork player could have had two goals in the period. After 12 minutes Collins’ powerful shot was well parried by Down goalkeeper Michael Cunningham. Six minutes later Collins dragged a low shot wide from a favourable position.

Down frustrated Cork from the throw-in, packing their defence while claiming three points of their own from a couple of Donal O’Hare frees and a fine effort from 50m from Cunningham in the 22nd minute.

Cork eventually found the target, O’Neill claiming the first of four unanswered points from a ‘45 a minute later before adding a free on the half-hour. He completed the set entering injury-time.

The outstanding Luke Connolly, easily Cork’s best player on view, took just 30 seconds on the resumption to make it 0-5 to 0-3 before captain Paul Kerrigan chipped in with a couple in quick succession.

And when Connolly tacked on another impressive point after 42 minutes

Cork had opened up an 0-8 to 0-3 lead. Within a minute Conail McGovern kicked Down’s first from play but Cork were never in any danger following Price’s intervention.

Substitute Brian Hurley almost broke the goal-deadlock within minutes of his arrival only for Cunninagham’s outstretched foot to deny him. The final whistle couldn’t come quickly enough for the small crowd.

Celtic slip up again as Aberdeen strike late in pulsating draw 14:40
GAA discourages the use of team buses when travelling to matches 11:25
Unbeaten Khabib to retire after UFC 254 win over Gaethje 10:12
Justin Thomas finishes with a kick to lead by one in California 07:46
Ulster aiming to douse Dragons’ fire and extend unbeaten start 06:00
Crossword Get access to over 6,000 interactive crosswords