Team boasts notable survivors from victory over Dublin in 2010 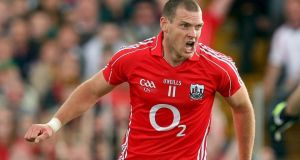 In the three years since they last played in the football championship the winds of fortune may have shifted in Dublin’s favour, but there will still be a mostly familiar look about Cork.

Indeed, while Dublin manager Jim Gavin is working off a radically different panel from that which lost out in that 2010 All-Ireland semi-final – by a single point, Cork going on to win the title outright – the Cork team for Saturday night’s All-Ireland quarter-final at Croke Park will consist of largely familiar personnel, although with some notably fresh faces too.

And having apparently found his best 15 players for last Saturday’s fourth round qualifier win over Galway, or at least sticking by those he’d selected, manager Conor Counihan is sticking with them again, even if it took a number of substitutions to ultimately swing the game in Cork’s favour.

So while the likes of John O’Rourke, James Loughrey, Brian Hurley and Alan O’Connor all retain starting places, it means Paul Kerrigan, Paddy Kelly, Paudie Kissane and Donncha O’Connor must once again be content with places on the bench, despite telling impacts against Galway.

This is assuming, however, that Counihan isn’t playing his dummy card once again, given last Saturday was the first time he’d actually stuck with the Cork team selected: what it also means however is that Cork boast several notable survivors from that day against Dublin in Croke Park towards the end of August three years ago: goalkeeper Alan Quirke, defenders Michael Shields, Graham Canty and Eoin Cadogan, and also Alan O’Connor, Aidan Walsh, Pearse O’Neill, Daniel Goulding, and Ciarán Sheehan all featuring that day, as did Paul Kerrigan, Paddy Kelly, Paudie Kissane, and Donncha O’Connor.

Gavin is due to announce his starting Dublin team sometime after this morning’s pre-game press conference – yet their survivors from 2010 will be notably fewer.

Donegal setback
Donegal will once again be without Mark McHugh for Sunday’s All-Ireland quarter-final against Mayo at Croke Park – although they welcome back footballer of the year Karl Lacey.

Despite hopes earlier this week that McHugh would somehow be recovered from injuries sustained in the Ulster final defeat to Monaghan last Sunday week – namely a concussion, a burst ear drum, and a five centimetre tear of his quad muscle – he’s not yet deemed fit to start in Sunday’s a rematch of last year’s All-Ireland final, which Donegal won by four points.

The problem, according to selector Rory Gallagher is not the concussion but the tear in McHugh’s quad muscle, which will require another scan.

Lacey returns
There is better news for Lacey, however, who was introduced after 54 minutes of last Saturday evening’s fourth round qualifier win over Laois, replacing corner back Paddy McGrath.

Lacey’s problem has been building up match fitness since the hip operation he underwent late last year, and manager Jim McGuinness clearly believes the challenge of Sunday’s game warrants his inclusion, although whether Lacey lasts the full 70 minutes remains to be seen.

McGrath is retained at corner back, with Declan Walsh dropping to the bench. Walsh has been nursing a calf injury since the win over Laois, and was unlikely to start.

Otherwise, McGuinness has gone with the same team which eventually got past Laois, 0-14 to 0-8. Ryan McHugh, a late replacement for Leo McCloone that day, retains his place at centre forward, flanked by David Walsh and Ryan Bradley, and fronted by that that daunting full forward line of Patrick McBrearty, Michael Murphy, and Colm McFadden – who together hit 0-11 against Laois.

Mayo manager James Horan will announce his team later today, with a number of players back in contention for starting places since the facile win over London in the Connacht final – Cillian O’Connor chief among them.

O’Connor was introduced at half-time in the London game and quickly erased any fear that his shoulder injury was still an issue – scoring 3-3 while injecting some significant life and accuracy into the forward line. On that basis Horan is certain to start him.

Midfielder Barry Moran, who has not featured for Mayo since they beat Donegal in the league, back in March (1-10 to 0-9), is also back in contention having recovered from an ankle injury sustained in a club game.