Confirmed: Kildare v Mayo will be played in Newbridge 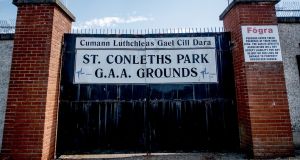 The GAA have halted ticket sales for Saturday’s round three All-Ireland football qualifier between Kildare and Mayo at Croke Park, and the game will now go ahead at their home ground St Conleth’s Park in Newbridge.

The GAA will release a statement shortly, confirming the 7pm throw-in.

It ends the stand-off between Kildare and the GAA with a sort of home victory, after Kildare football manager Cian O’Neill had reiterated his firm stance on the matter on Tuesday, claiming “it’s Newbridge or nowhere”.

Kildare were entitled to home advantage, having been drawn first from the bowl on Monday morning, before a meeting of the GAA’s Central Competitions Control Committee (CCCC) later decided that the 9,020 capacity at St Conleth’s Park was not suitable for “health and safety” reasons; for all-ticket games that capacity is further reduced by 10 per cent.

Kildare went ahead with a closed training session in Newbridge on Tuesday evening, along with O’Neill, on the basis they were preparing for the game being played at Newbridge, with no suggestion that they were open to any compromise. It’s not yet clear if or when general ticket sales for Newbridge will be available.

Earlier, O’Neill had called a press conference for 5pm, prior to that training session, only for that to be cancelled some two hours in advance, as O’Neill cited work commitments; earlier he told Kildare FM that he “would like to think that common sense, logic and fairness and fair play will prevail here from the GAA’s perspective and realise that we all make mistakes.”

Kildare had also made a written submission to Croke Park outlining the reasons why they would not be fulfilling the fixture at GAA headquarters, an earlier statement saying: “We are making it clear that we will not play this game in Croke Park. St Conleth’s Park is perfectly capable of hosting the tie on an all-ticket basis, Newbridge is perfectly capable of dealing with the number of supporters that will attend.”

The Gaelic Players Association (GPA) also came out to back Kildare, their chairman Seamus Hickey describing it as unacceptable that players be subjected to such additional stress around a championship game: “The main concern from the GPA is the consistent application of rules and fixturing that players can prepare adequately for fixtures. Now we have a situation that Mayo players are preparing for a game in Croke Park while being open to the possibility that it could be changed back to St Conleth’s Park.

“That’s not a situation that is acceptable or tolerable for our players, especially at such a busy part of the year where they are balancing their lives with their sport. All preparations hinge on these decisions. Decisions made without considering the players is not acceptable in our eyes.”

Tickets for the Saturday’s game, originally to be played in Croke Park as double-header with the meeting of Cavan and Tyrone (5.0pm), had gone on sale on the GAA website on Tuesday: the Cavan-Tyrone game is now likely to be moved to Brewster Park, Cavan’s original choice of ‘home’ venue.

Mayo GAA released a statement at lunchtime on Wednesday expressing their expectation that “all Mayo GAA season ticket holders will get access to a ticket for this game.”

3 Leo Cullen: ‘a good chunk of the guys who are injured will be back’

Leo Cullen: ‘a good chunk of the guys who are injured will be back’ 06:15
Rachael Blackmore’s Grand National victory resonates around the world 06:00
Louis and Robinson may have died broke but their legacy is timeless 06:00
Potential of Parsons and Wall put French and English on notice 06:00
Ken Early: It’s time for Alexander-Arnold to move to the middle 06:00
Crossword Get access to over 6,000 interactive crosswords