Confident Dublin need to be careful

Meath have the tools but have they the stamina to cause an upset? In Ulster Monaghan’s momentum has outstripped Donegal 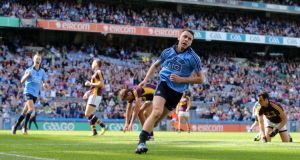 There’s something about Dublin that feels familiar to me from my own football career and that’s the unbreakable confidence that teams acquire from consistent success.

Under the management of Jim Gavin, Dublin are still evolving and improving and one thing that stands out is how attractive their style is to watch, setting up one on one and giving defenders licence to attack and no matter what anyone says about the bottom line in championship football, that’s also good for a team’s morale.

It’s becoming clear that although opponents have to be able to live with the pace and intensity with which Dublin play the game, the champions also have a clear strategy of raising that intensity in the last 20 minutes or so and that anyone hoping to beat them must bring a game plan to counter that.

That has to have an effect on how opponents manage their match-day panels. Traditionally teams start their best 15 and replace anyone who’s looking off the pace.

Half way through the second half Dublin will introduce players and these substitutions are designed to have an accelerated impact, not just to relieve tired players. This has been seen time and time again with Kevin McManamon (proving a thorn in the side of most teams, particularly Kerry) Dean Rock and this season, Cormac Costello.

You’ve a defender who’s been working hard for 40 or 45 minutes and suddenly there’s a new, energised player coming in to take you on and run you ragged.

I think at this stage teams should be holding back one of their best defenders or man markers for that critical phase of the game so that they can counter a fresh forward, hitting the ground running.

Meath may know what the task entails but how are they progressing? Judging by the semi-final against Kildare, they’re doing well. The physical intensity went hand in hand with an excellent defensive display – brilliant execution of tackles – for the first 50 minutes and the performance showed that they’d learned from previous meetings with Dublin.

Their forwards were very menacing even if they got a lot of latitude and Stephen Bray was excellent but I think he’ll find it harder tomorrow because Jonny Cooper and Philly McMahon have really improved as man markers. They have been found wanting in terms of pace around the middle and need to address that, as they were very successful last year in getting Stephen Cluxton to kick into contested areas.

There are opportunities through the middle I believe with Ger Brennan still not back for Dublin and Meath have the pace and scoring ability to get goals but the best route to goal will be on turnover ball. If the forwards can tackle back and strip possession from Dublin attacks the champions will be vulnerable to counter-attacking at speed.

I think Meath will do well tomorrow and stay with the game for longer but ultimately Dublin have too much.

The Ulster final also promises to be fascinating. Last year it was hard to believe that Donegal were All-Ireland champions so great was their loss of form. They are certainly improved this year and haven’t the same injury problems although I think the departure of Mark McHugh is a big loss.

Monaghan are an evolving team and they are more battle-hardened coming into this after three hard matches with Tyrone and twice with Armagh. If they bring the same intensity as last year and I think they will, they’ll win. It won’t be by much because the teams are set up too defensively for anything except a low -scoring game.

You have to be impressed all the same by Monaghan’s defensive strategy, with the quality of their marking and tackling and with how difficult they make it for opponents to breathe let alone find space.

Donegal’s biggest problem has been the lack of panel depth and although they have tried hard to bring through younger players it’s not clear how ready they are for a test like this. I expect the team to revive up to a point but can’t see them getting back to the highs of 2012.

It will be a miracle if Jim McGuinness manages that.

In the qualifiers, I’m delighted to see Clare still involved, having managed them at one time and knowing how much football means to them. It’s unusual to see the footballers outlast the hurlers but the confidence they showed running Kerry so close in Ennis will stand to them here. But Kildare in the form they showed against Down should prove a bridge too far.

Finally Roscommon have home advantage against Armagh and have shown definite improvement under John Evans. He’ll be driving them on and they have a big opportunity because Armagh, although back on track, have had a punishing schedule and this is their fourth match in successive weeks.