Cavan too late in bringing fight to Kerry 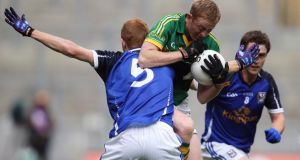 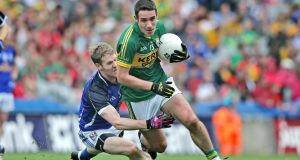 Kerry 0-15 Cavan 0-9: Next up is a significantly more daunting challenge but Kerry had enough to get past Cavan in Croke Park in the first of today’s All-Ireland football quarter-finals.

It wasn’t exactly vintage Kerry and had Cavan shown a little more belief in the first half it might well have been much closer in the end. They certainly finished the stronger, but by then Kerry already had more than one foot in the All-Ireland semi-final and another showdown against old rivals Dublin.

Cavan didn’t go out without a fight, and despite being well outplayed in the first half, raised a decent charge in the second half – helped in no end by Kerry dropping their intensity. Indeed, Cavan outscored Kerry seven points to four in the second half, also hitting several costly wides in succession, while Rory Dunne helped shut down the Kerry attack.

The best scores from Cavan came from substitute Niall McDermott and Feargal Flanagan and in the end there was some real concern for Kerry manager Eamonn Fitzmaurice as to why they allowed Cavan back into the game the way they did.

Yet Cavan looked like a team dangerously out of their depth in the first half, paralysed by both the occasion and Kerry’s undeniable class and superiority in every sector of the field. They started okay – Martin Dunne kicking the opening score after three minutes – but their game went rapidly downhill from there, and it took another 25 minutes before Cavan would score again, through midfielder David Givney.

By then Kerry racked up nine points: Johnny Buckley converted three 45s in succession, while Donnchadh Walsh, Declan O’Sullivan and Kieran Donaghy all scored from play – and with Colm “Gooch” Cooper as majestic as always in both play and placed balls (hitting four frees in the first half), Kerry were up 0-11 to 0-2 at halftime, without really trying.

Just as well, as it turned out, as Kerry never once repeated that sort of dominance in the second half. So Cavan, contesting a first ever All-Ireland quarter-final, at least left with plenty of pride intact and lots to build on for 2014.

Cavan’s Rory Dunne, named man-of-the-match, insisted the Ulstermen will keep going until they get some silverware.

“It’s devastating to lose a game at the quarter-final stage, this is all new to us,” he told TV3. “We fully believed coming into today that we could actually win this game, but unfortunately we didn’t get a great start. We hope we made the Cavan supporters proud in the second half with a bit of a comeback.

“We just said at halftime, ‘look’it lads we are down by a right bit, let’s go out, let’s throw everything at Kerry, let’s not sit back, let’s not have any fear, let’s attack them.’

“We did that a bit, it didn’t fully work out, but we gave it our all.

He added: “It’s been a good year but, at the end of the day, we still have no silverware. This team wants a medal and a cup to show and we’re not going to stop ‘til we get one.”

1 Dave Hannigan: Notre Dame’s Fighting Irish leprechaun needs its ass kicked
2 Trick or treat: Ireland set for Halloween showdown with France in Paris
3 Leeds go back to the summit after impressive win over Stoke
4 Katie Taylor out to banish all doubts in rematch with Delfine Persoon
5 Justin Rohrwasser: The Patriots’ surprise draft pick with a Three Percenters tattoo
Real news has value SUBSCRIBE

Dean Rock admits ‘less in more’ as he approaches Keaveney’s scoring record 19:46
Leeds go back to the summit after impressive win over Stoke 19:32
Holder shines with the ball as West Indies take control against England 19:23
Club rugby to start back from September 12th on regional basis 18:32
Katie Taylor out to banish all doubts in rematch with Delfine Persoon 17:56
Crossword Get access to over 6,000 interactive crosswords