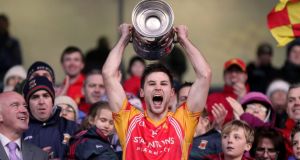 The 20-year wait for Castlebar Mitchels ended at MacHale Park, Castlebar, yesterday where Pat Holmes’s team finally got their hands on the Mayo senior football championship title. The former Mayo manager, along with John Maughan, was a member of that Castlebar team who won the title in 1993.

In an unique final involving two teams from the same parish, Breaffy were bidding to win their first ever title.

Holmes put the victory down to the commitment of the players who decided to forgo their summer stint abroad and stay at home.

“We lost two finals because some players didn’t stick around. They stayed this time and it is because of them we won the title,” explained Holmes who was the losing manager in 2011 when Castlebar lost to Ballintubber.

He took a gamble playing Mervue United star Tom King who was named at corner forward at the last minute.

“We didn’t know how Tom would be after playing for Mervue on Friday night but he came through fine and thankfully he played well,” said Holmes.

Danny Kirby stabbed home a loose ball to the net after just eight minutes as Mitchels blew a penalty opportunity when Neill Douglas blazed wide from the spot-kick.

Points from minor star Liam Irwin, Séamus O’Shea and Alan Durcan (two frees) kept Breaffy well in the game and they were still in with a shout with a gale to their backs going into the second half as the rain poured in from the Atlantic.

However, King, with his burning pace on a heavy sod, played a star role scoring four points as Mitchels, who kicked 13 wides, managed to harness the elements much better and smothered Breaffy who were limited up front.

Breaffy did bring it back to three points at one stage but substitute Shane Hopkins, King and Neil Lydon fired over late points to seal victory.

2 ‘Embarrassment, anger, sadness’: the decline of the great Stephen Hendry