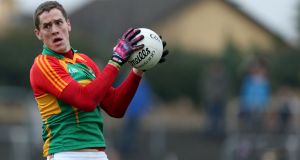 Leitrim were no match for a stronger and better organised Carlow in a poor game played in wintry conditions at Páirc Seán Mhic Diarmada, Carrick-on-Shannon on Saturday.

The home side got off to a good start with an early point from play by Emlyn Mulligan. Despite the advantage of a strong breeze, they struggled for long periods as Carlow, led by the impressive Brendan Murphy at midfield, got to grips with the conditions. They scored five points without reply, including four excellent frees by Paul Broderick to lead by 0-5 to 0-1 after 20 minutes.

Following an exchange of points by Leitrim’s Paddy Maguire and Carlow’s Chris Blake, the home side came more into the game for the remainder of the half with two points by Mulligan to leave them 0-6 to 0-4 in arrears at the interval.

A Gary Kelly point from play immediately on the resumption was followed by three further Carlow points without reply as an increasingly frustrated Leitrim failed to make any impression on a solid Carlow defence led by the half-back line of Gary Kelly, Benny Kavanagh and Derek Hayden.

Then in the 55th minute Leitrim managed to work the ball into the Carlow defence where Ronan Kennedy finished to the net from 20 metres. However the home side failed to score for the remainder of the game and two further Carlow points sealed a deserved victory.

1 Born to ride, born to win: Sam Bennett, the making of a green machine
2 Ulster’s European dream clinically crushed by Toulouse
3 Keith Duggan: Surreal story of John Delaney needs to act as a wake-up call for FAI
4 Tottenham offer out of favour Dele Alli to PSG
5 Next stop the Champs-Elysées in green for Sam Bennett
Real news has value SUBSCRIBE

St Brigid’s take Roscommon crown off Pádraig Pearses 18:08
Kiladangan end Loughmore/Castleiney’s double dream 17:22
Here is your handy guide to sport on television this week 17:01
Aaron Connolly rounds off a fine afternoon for Brighton 16:35
Tottenham offer out of favour Dele Alli to PSG 16:27
Crossword Get access to over 6,000 interactive crosswords