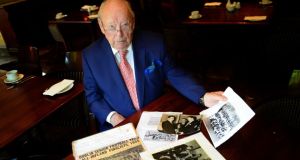 Denis Mahony, who captained the Dublin side that were beaten by Kerry in the 1955 All-Ireland senior football final, with memorabilia from that historic championship run. Photograph: Dara Mac Dónaill/The Irish Times.

It’s all of 60 years since Denis Mahony captained Dublin in the 1955 All-Ireland final against Kerry. Now 88, he sits in the chair and remembers, occasionally digressing or rumbling with laughter at something particularly amusing. On the table there is a scattering of memorabilia: photographs including one of the team, poised for action on that afternoon in September ’55. You don’t need a shot of hyperbole to talk about it as the most influential All-Ireland in history.

It attracted a then record crowd of 87,102, surpassed only once since, and marked the advent of a Dublin team born and bred in the city. They were tactically and technically innovative and convinced their time had come even against Kerry. The clash captivated the country and became a prologue to the counties’ legendary encounters in the 1970s and beyond.

“Danno Mahony, a fine leader, is a tireless worker and can afford to come up and help his half-backs on demand,” wrote PD Mehigan in these pages of the Dublin corner back.

“I roamed a bit but Peter O’Reilly (Dublin trainer in the 1950s) kept me in the bloody corner,” remembers the player himself.

Defeat that day was all the more crushing for being unexpected. Kevin Heffernan said that it “formed a large part of what I became as a person”.

He wasn’t the only one devastated. “We all were,” says Mahony. “I had to go to the back of the Cusack Stand to congratulate the Kerry team and I came out crying. You put so much into it and you know . . .” He trails off: “That’s sport.”

The re-orientation was complete when Monsignor Fitzpatrick, who ran the juvenile section for the emerging St Vincents club, came calling and cricket disappeared into the backfield.

“We trained very hard because we’d no money and there was three nights training so we went to five. That was the fun. We were all knocking around together anyway.”

Mahony was so close with Freaney and Maher that the three of them and their wives would go on honeymoon together. They also traced the same steps into Dublin’s new age from the minor All-Ireland of 1945 through the growing influence of Vincents and the club’s drive to make the county team one of native Dubliners.

The club had 14 players, Mahony and his friends included, on the Dublin side that won the league in 1953, beating All-Ireland champions Cavan in the final.

If there was a problem it was in a growing perception that Dublin were a bit mercurial: good for the league, and very stylish for such times of the year, but not so much for the championship.

Nineteen-fifty-five would be different. The league was won again, also against that year’s All-Ireland holders – Meath – but this time they stayed on course for the championship. It was the 20-point trimming of the same opponents in the Leinster final that spelled out the change of gear in Dublin.

The strange repetition of history has seen Dublin drawing All-Ireland semi-finals with Mayo at 30-year intervals – and so far losing the final to Kerry – since 1955.

“Mayo had a great team,” according to Mahony. “They had Seán Flanagan, the Flying Doc (Pádraig Carney) and Tom Langan (a Team of the Millennium laureate). Lavin played full back and I was corner back and we decided we’d share Langan between the two of us.”

It took a difficult free on a wet day from Maher to send the match to a replay, which Dublin won but life was about to get complicated for Denis Mahony.

“I didn’t feel too well the night of the replay and I went to the doctor on the Monday morning and he knew right away and he says to me, ‘you have appendicitis’.

“His medicine was, ‘go away and don’t see anyone and don’t appear in public and I’ll let you play’. He booked me into the Bon Secours in a private room except with a Christian Brother. I was there for the week and I was working in Smithfield at the time and my boss didn’t even know where I was. He wasn’t too pleased but he knew he had an All-Ireland player on the staff.

“I didn’t have it out at that stage. We kept it quiet until some fella on the Evening Press got a message on the lower corridor that I was upstairs so it all leaked.

“This matron came to me and said ‘I’ll have to ask you to leave’. There’s a group of people who have come up and left a load of fruit and potatoes. The lads on the docks – the real Dubs – they were after knocking it off, off the boats and bringing them up for the captain.

“That was the mood in the city. There was a lot of fun. I played in the match and it must have affected me but I played another match the following week and played an absolute blinder. I checked myself in the following Monday.”

Unlike many of his team-mates, Mahony retired before the All-Ireland was eventually won, in 1958. “I knew I was finished,” he says. “They used to pick the team upstairs on a Monday night – the chairmen and the selection committee – so I went up and they were sitting around the table. I think we were due to play Fermanagh the following week and I said, ‘I’d prefer if you didn’t pick me’.

“No-one asked me to stay so I knew. I got the message. The time had come.”

There was however a post-script. Freed from the commitment of playing, Denis Mahony became chair of the county board in time for the 1958 All-Ireland. He immediately elevated conditions for the players. Post-match catering was switched from a cellar in Barry’s Hotel to the Gresham but there were other matters to be addressed.

“Parnell Park had to be overhauled. We built O’Toole Park. At the opening Kevin Boland, the Lord have mercy on him, was the Minister for Defence at the time. He was a real Dub – if there was a good fight, he’d be in the middle of it.”

Boland knew that Dublin were short an important player for the pitch-opening match.

He didn’t stay around too much longer. “I did four years and they wanted me to stay on but I did a runner.”

Denis Mahony will watch this weekend’s renewal of the ancient rivalry from afar, as he spends time in Portugal at this stage of the year. “They’re blessed they got the two teams they got in this year’s final. I hope it’s a classic.”

He knows though, better than anyone, that it’s not always that straightforward.